Very Silly Songs! (originally known as A Very Silly Sing-Along!) is the seventh episode of VeggieTales and the first sing along video.

The episode begins on the countertop as Larry welcomes the viewers to what he thinks is the first "VeggieTales Workout Video." He starts exercising, and then proceeds to the trampoline and jumps gradually until he is high enough he starts hitting a cupboard directly above him. As he begins to yell to Bob for help, Bob comes onscreen and informs the viewers that Larry is confused and that today's video is actually the first "VeggieTales Sing-Along tape." He explains that they will play their favorite VeggieTales songs and place the lyrics on the bottom of the screen. To demonstrate, Bob sings the theme song while the French Peas type on Qwerty, after which they continue to type even after Bob calls for them to stop and Larry still yells for him to help. Bob immediately asks for the songs to be started as chaos begins to ensue in the kitchen.

In the second countertop scene, Larry does it again by welcoming the viewers to the first "VeggieTales Home Improvement Video," in which he begins teaching them how to replace a leaky fixture on a sink whilst reminding them to turn off the water and that he had Jimmy do it before he began. As Larry starts wrenching off the fixture, however, Jimmy admits to turning off the wrong water supply. Despite this, Larry continues and is launched offscreen by water gushing out of the fixture. Jimmy comes onscreen and elaborates that he thought he was dealing with bathrooms and decks as Larry once again yells out for Bob to get him down.

In the final countertop scene, Larry welcomes everyone to the first "VeggieTales Success Video" about financial success. Fed up with Larry getting confused on what today's video is, Bob comes out and reminds Larry that he is in a sing-along video. After Larry realizes this, he asks Bob what song should be played first. Not wanting to tell Larry that the sing-along is almost over, Bob walks away. Larry follows, however, and informs him of his purchase of a chocolate factory "with no money down," which surprises Bob.

According to Mike Nawrocki, the reason for the sing-along tape was from the success of VeggieTunes, a deal that Word Records wanted to promote as a giveaway of the songs. He was the one who edited the words on the video, which resulted in him throwing out his back while sitting on his mother's old dining room chair, which had a hutch that was bad on the back. After the video was released, he and his wife went to Columbia for about two weeks while he had a bad back. 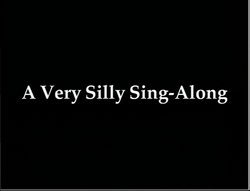