Big Idea Wiki
Register
Don't have an account?
Sign In
Advertisement
in: VeggieTales, VeggieTales in the House, Outsourced productions, Netflix

VeggieTales in the House is a series that is exclusive to Netflix that began streaming November 26th, 2014, and the fourth show created by Big Idea. This series marks the debut of the new redesigns of the VeggieTales cast.

On March 14th, 2014, Netflix announced three Dreamworks animated shows coming by the end of the year. They were All Hail King Julien, The Adventures of Puss in Boots, and of course, VeggieTales in the House. Phil Vischer stated about the series on his podcast around late 2013/early 2014, giving some hints on the new designs.

This series introduces the new redesigns of the main cast from VeggieTales, which were revealed around Summer 2014. The reception amongst the designs are widely panned amongst the fanbase, and some even trying to petition to bring back the old design. Show designer Joe Spadaford states that the reason they redesigned this because the riggings on the models were used since 2000 and they wanted to start something fresh, since the old designs were getting harder to animate. Phil Vischer stated on a podcast that regardless how the designs are, he likes them at the same time.

Mike Nawrocki and Doug TenNapel posted some videos on the official Facebook that the morals on this series will be the same as the main show itself.

According to Phil from his podcast and a article from DECIDER, the series would last three years with 150 shorts.

A spin-off series called VeggieTales in the City aired on February 24th, 2017 and contained the rest of the episodes. 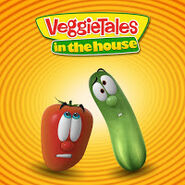