The VeggieTales Theme Song has had many different versions and been performed many times over the years, but has generally remained the same over time.

The first opening begins with the opening credits appearing over a “white void” background with the following text:

Bob the Tomato and Larry the Cucumber talk offscreen while the credits fade in and out on the screen. The conversation consists of Bob and Larry figuring out how to play the theme song. Bob suggests playing it on a guitar, but Larry reminds him he doesn't have any hands. Bob then ambiguously suggests another instrument, but Larry refuses because he thinks it will make him look silly. But once Bob reminds him that they’re doing this for the kids watching, Larry agrees to perform the song. Larry then pops his head into the left side of the frame with a sousaphone in tow, smiling at the viewers. He then hops to the center of the white void, and then begins to play the opening baseline of the theme song.

Now Bob begins hopping into the frame, singing and bobbing along with his cucumber friend. After Bob reaches the end of his verse, he leans in to the camera with a big, toothy grin letting the viewers know the show’s about to begin with the iconic line, “Have we got a show for you”. Larry leans into view from behind Bob, nodding his head in agreement.

It then transitions to the up-tempo chorus of male and females voices (Lisa Vischer, Phil Vischer and Kurt Heinecke) singing the show’s title, featuring a montage of clips from the show being played over it. This is followed by three short refrains of the chorus. At the end of each refrain, it cuts from the clip montage to a shot of Mom, Dad and Junior Asparagus joining Bob and Larry in the white void. The tempo and music becomes faster and more frantic with each refrain.

After the third and final refrain, they transition to the next verse, “There’s never-ever-ever-ever-ever been a show like VeggieTales!”, which is repeated twice. This leads into the final verse, where we again, cut back to the veggies singing altogether in the white void exclaiming, “It’s time for VeggieTales!”. This is followed by confetti flowers falling over the characters as they sing.

The song finally ends with Larry running out of breath while playing his sousaphone, collapsing onto his back from exhaustion. He plays the final bum note, which blows some of the confetti flowers out of the bell of the sousaphone. All the veggies smile and look at the camera as we hear children laugh offscreen.

This version was only used on the original 1993 VHS release of Where’s God When I’m S-Scared? and has never been released on DVD.

The second version is very much the same opening as the first version, but has the following significant differences:

This version was featured on the original 1995 release of VeggieTunes.

The opening is now re-mastered with improved animation, enhanced picture quality, as well as re-recorded music and vocals. These specific updates include:

Even with all the updated audio and visuals, the song retains the same structure and white void segments as before.

This version is featured on the albums VeggieTunes 2, A Queen, a King, and a Very Blue Berry, and the re-release of VeggieTunes.

It‘s also worth noting that the song was re-recorded again in 2003.

This version is featured on VeggieTunes 4.

The opening has now been entirely reanimated and re-orchestrated, marking the biggest and most drastic change since 1998. The length of the song has also been shortened significantly, due to an increased tempo and removing the solo verses of Junior and Larry.

The opening begins with updated versions of the opening credits and VeggieTales logo being blown out of the bell of a sousaphone as the familiar baseline is played on it. The camera then zooms out to reveal Larry playing the instrument, as Bob hops into the frame. Bob begins singing as he does in previous versions, but as each lyric is sung, he is now joined by the rest of the main cast of VeggieTales characters, including Junior, Jimmy and Jerry, Mr. Lunt, Laura Carrot, Pa Grape, Petunia Rhubarb, Madame Blueberry, Archibald Asparagus, The French Peas, and Mr. Nezzer. They all hop into the frame as they sing, moving and bumping into one another as they try to make space for each other on screen.

As they all finish singing, it is revealed Bob has been pushed to the back of the group by accident. He excuses his way to the front and says his iconic opening line, before Larry pops into frame with a smile to start playing the lead in to the chorus.

The song features a brand new clip montage, only featuring clips of episodes created after Josh and the Big Wall!. Brian Roberts stated in The Princess and the Popstar commentary that this was done because the older clips would “stick out like a sore thumb”, compared to the newer clips with more modern and refined animation and graphics.

This time, the refrain is only sung once, giving Bob the only solo in this version. Like the old opening, at the end of the refrain we cut back to the white void with all the veggies jumping with excitement as they sing. Larry continues to play the sousaphone, straining to keep up with the frantic pace and energy of the song.

The rest of the song continues as it usually does, with colorful confetti falling this time instead of flowers while they sing. But this time, as Larry collapses from exhaustion, he accidentally startles The French Peas. Because they are precariously sitting atop Mr. Lunt’s hat, Phillipe loses his balance and fall into the bell of the sousaphone. However, once Larry plays the final bum note, Phillipe is blown out of the bell and lands safely back on top of Jean-Claude. All the veggies laugh together with the kids from offscreen.

In 2014, this version of the opening got another new clip montage, including a much wider range of clips than previously used before. This ends up removing the shot of the VeggieTales cast jumping at the end of the refrain in the process.

This time, Bob and Larry are the only characters present to perform, giving a very reminiscent feel of the original opening. But instead of showing a clip montage during the chorus, the camera zooms into the bell of Larry’s sousaphone and pans over several photos of depicting episodes from the show, utilizing stock art from the VeggieTales library of DVD covers. After the final verse, we zoom out of the sousaphone and return to the white void. As usual, Larry collapses from exhaustion and blows confetti out of his sousaphone as Bob laughs with the offscreen kids.

It uses the same audio from the 2010-2014 opening, albeit all the other characters' vocals (besides Bob) are removed for the opening verse.

This version is featured on A Very Veggie Party Playlist.

Covers and Other renditions

A retooled version of the theme song (referred to as The VeggieTown Municipal Anthem) was created for one of the greetings for the original VeggieTown VBS curriculum. It was sung by Bob and Larry, featuring some very wacky and silly impromptu lyrics by Larry.

When VeggieTales made its transition from the T.V. screen to the stage in 2002, a new extended Broadway-esque version of the theme song was made to create a big musical number for the show’s finale. It has been subsequently used in almost every VeggieTales Live! show to date.

The song is sung and performed by Bob, Larry, Junior, Pa Grape, Jimmy and Jerry, Archibald, and an unseen choir of male and female voices. In later live shows, Mr. Lunt is added to the group despite not being included in the recording. Sometimes dancers touring with the shows would be featured during the song dressed in elaborate vegetable-themed costumes.

The musical score consists of a full orchestra instead of the usual polka instruments.

This version is featured on the album Have We Got A Show For You: 10 Years Of VeggieTales.

In 2004, Rebecca St. James recorded a cover of the song for the VeggieRocks! album. The song was re-orchestrated to fit a “rock” musical style, featuring electric guitars and drums.

God Made You Special

An instrumental techno-pop version of the song can be heard during the celebration on the opening countertop as well as the closing credits of the DVD.

A remixed version of the Musikclips song was included among the medley of foreign versions of popular VeggieTales songs.

If I Sang A Silly Song

Larry performs a short big-band version of the song as host of the “Silly Song Telethon”.

VeggieTales in the House/in the City

Although the Netflix series had a brand new theme song written for it, some of the lyrics are direct callbacks to the original theme song. More specifically, the lyric of “Broccoli! Celery! Gotta be...”.

For the opening number of the Christmas special, the VeggieTales cast (excluding Mr. Nezzer and Laura Carrot) perform the song on stage before a live vegetable audience in Mr. Nezzer’s Theater. They perform it broadway-esque with top hats and canes on a large set of risers fitted with bright, flashy stage lights.

This is the first time, however, that Larry doesn’t play the sousaphone. Instead, Larry sings onstage with the others while Bruce Onion conducts Khalil playing in the orchestra pit.

It’s worth noting that the same audio from the 2010-2014 opening is used, albeit with some very minor instrumentation and percussion added.

Have we got a show for you!

Have we got a show for you!

Larry: Cauliflower! Sweet and sour! Half an hour!

Bob, Jimmy, and Jerry: If a squash can make you smile,

Bob: (clearing throat) Excuse me. Have we got a show for you!

(Note: The 2015 version has the same lyrics as this version but only Bob sings the first verse.)

Featured Vocalist: If you like to talk to tomatoes,

Larry: If a squash can make you smile,

Larry: Up and down the produce aisle...

Bob and Larry: Have we got a show for you!

Have we gotta show for you...!

Cauliflower! Sweet and sour! Half an hour! VeggieTales! (Ahh...) 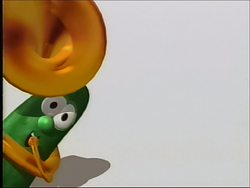 Retrieved from "https://bigidea.fandom.com/wiki/VeggieTales_Theme_Song?oldid=206454"
Community content is available under CC-BY-SA unless otherwise noted.