According to Phil Vischer's autobiography, before production on Where's God When I'm S-Scared?, he tried to sell the show with this promo to Christian video distributor companies in hopes that he'd get the money to make it, but ultimately failed miserably. Phil managed to get the money from a man at his church who dipped into his retirement funds and gave him $60,000. 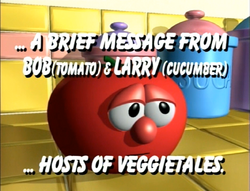 Veggietales - take 38 (HQ)
Add a photo to this gallery
Retrieved from "https://bigidea.fandom.com/wiki/VeggieTales_Promo:_Take_38?oldid=179684"
Community content is available under CC-BY-SA unless otherwise noted.