VeggieTales Live! On Stage was the very first VeggieTales Live! show in 2002, touring during the 2001-2002 and 2002-2003 tour seasons. The show was produced by Clear Channel Entertainment, which is now known as IHeartMedia.

In VeggieTales Live!, Bob, Larry and other favorite characters like Junior Asparagus and French Peas, Jean Claude and Phillipe, recreate the best-selling video Dave and the Giant Pickle, a unique retelling of David vs. Goliath. The Veggies play the roles of David, Goliath, the Israelites and Philistines. They also recreate Josh and the Big Wall!. Amazing set design, unusual costumes (the characters don’t have arms or legs), lively musical numbers and Monty Python inspired humor make the show appealing for kids and adults.

Add a photo to this gallery 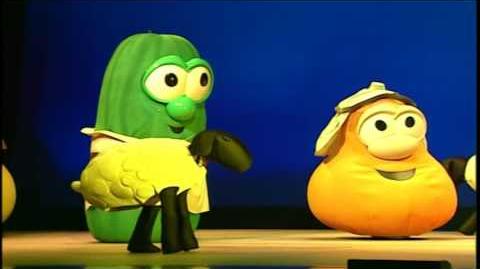 VeggieTales Josh and the Big Wall From Screen to Stage
Add a photo to this gallery
Retrieved from "https://bigidea.fandom.com/wiki/VeggieTales_Live!_On_Stage?oldid=212459"
Community content is available under CC-BY-SA unless otherwise noted.