VeggieTales Christmas Spectacular! was a VeggieTales television special. It originally aired on Ion Television (formerly Pax TV) in 1998, 1999, and 2000.

The special took place on a big stage where the Veggies have ostensibly booked time with a major network to air a special film as part for the VeggieTales Christmas Spectacular! However, one big problem becomes almost immediately clear - Larry the Cucumber can't find the film. Given this discouraging news, the Veggies attempt to fill the time with a variety of musical performances.

First up is Junior Asparagus who is being uplinked by satellite live from the Holy Lands. He sings the song "While By My Sheep" surrounded by a flock of sheep that bleat along with the melody. When the satellite uplink is lost, the Veggies continue to scramble while Pa Grape attempts to buy time with the network, which is threatening to pull the plug on the production.

Next up is "Silly Songs With Larry" where Larry sings "Oh Santa".

The third musical number features Archibald Asparagus singing a German folk song, "Ring, Little Bells", while ringing some bells. Larry joins in, but as the song ends the Veggies learn that the network is about to pull the plug. Fortunately, the film reel is found by Jimmy and the feature The Toy That Saved Christmas is shown.

Around 1998, Phil Vischer began talking with PAX TV about the possibility of taking over their Saturday morning block, with Bob and Larry introducing each show alongside VeggieTales. Although initially interested, they decided to give them an hour-long prime time Christmas special instead.

This posed a problem, since their only Christmas special at the time was only a half-hour long. They eventually decided to include the VeggieTales Theme Song and Junior's satellite uplink from the 1997 Young Messiah tour to fill up time. However, this meant they still had to create around 14 minutes worth of brand new animation to introduce/conclude the special, which they began making shortly after The End of Silliness? finished production.

Because of this unexpected project, production on Larry-Boy and the Rumor Weed was delayed for a few weeks. 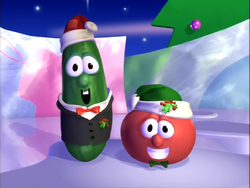