Uncle Blobb is a real estate agent and a former carnival barker at the Carnival Moon.

Uncle Blobb is a humanoid alien, somewhat resembling a green frog with blue hair. He wears a magenta tuxedo with black shoes and bowtie, and a cummerbund around his waist. He also wears a top hat with a ribbon that is the same color as his tux. 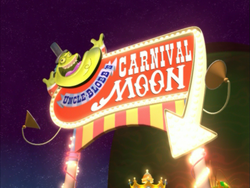 Retrieved from "https://bigidea.fandom.com/wiki/Uncle_Blobb?oldid=115869"
Community content is available under CC-BY-SA unless otherwise noted.