Trouble on Planet Wait-Your-Turn is the first direct-to-video episode of 3-2-1 Penguins!

Jason and Michelle's parents drive them to Grandmum's cottage. Michelle is excited to visit, but Jason says he would rather be at space camp like his friend Trevor. His mom tells him that he'll be able to go to space camp after the cottage. Grandmum then exits the cottage to greet her two grandkids. Jason and Michelle's parents leave at first, but return to give Jason the Turbo 3000 Game Console. An enthusiastic Jason runs quickly to the cottage.

Upon entering, Jason looks around and notices how old-fashioned some of the furniture looks. He wonders how he would be able to play the console on an old T.V. Grandmum comes up behind him and asks what he's holding. Jason tells her that he's holding the best game in the world, Bonsai Master 3: Pruner of Destiny. She asks him if he can make it work on the old T.V. Jason answers that no job's too hard when you use your head. As Jason prepares to plug in the console, Michelle walks up and asks him what he has. He tells her that it's a Turbo 3000 and their dad gave it to them. She asks if he'll be able to hook it up to the old T.V. He replies that it'll be easy.

With some difficulty, he finally manages to plug it in. Michelle, holding one of the controllers and eager to play it, asks Jason if the console is ready. He says that since their dad handed it to him and he was the one who hooked it up, he gets to play it first. She retorts that hooking it up is half the fun, so she gets to go first.

As the twins argue about who gets to play the console first, Grandmum asks them what is going on there. She then tells them she can't have them fight like frogs and dogs. She tells them that she's glad that they got a new video game console, but advices them that they need to wait their turns, and let someone else go first every now and then. She says this is called patience, and it's a virtue. She quotes the Bible verse, "A patient man has great understanding, but a quick-tempered man displays folly." She asks Jason and Michelle if they know what folly means. They shake their heads and Grandmum tells them that folly means foolishness or trouble and having to go first all the time only leads to trouble, but good things come to those who wait.

After Grandmum leaves, Jason says he couldn't agree more, and tells Michelle that is precisely why she should wait her turn. Michelle says that since she has the controller, she gets to play it first. Jason boasts that he has the controller that's plugged in. Not long after he turned on the game console, the TV gets busted. Jason is rendered speechless.

At the dining table, Michelle asks what's for dinner. Grandmum answers that she's serving one of Granddad's favorites, pie. Michelle giggles at the thought of eating pie for dinner. Grandmum replies that she and Granddad would have it thrice a week. Michelle asks if pie is always served for dinner in England. Grandmum tells her that some strange dishes are sometimes served. Michelle, a little hesitant to eat, asks what kind of pie they're having. Jason is about to eat his piece of pie when Grandmum tells Michelle that it's kidney pie. Michelle and Jason ask if they can go upstairs to play. Grandmum allows them to do so, while adding that she was going to show them her collectibles, but it could wait until tomorrow. As Jason and Michelle go upstairs, Michelle notices four penguin figurines on a shelf. Grandmum imforms her that Granddad gave them to her on their honeymoon in the Falkland Islands. Michelle says that she'll be careful with the penguin figurines.

Upstairs, Jason is bored out of his mind and Michelle is playing with the penguin figurines. Jason notices a ring hanging from the ceiling. After a few jumps, he grabs it and a staircase to the attic is revealed. Michelle tells Jason to put the stairs back. Jason says that he needs to pull them from the top and climbs up to the attic. Michelle realizes what that would mean and follows him.

Jason finds some outer space-themed stuff, including the Rockhopper, in a box. Michelle finds some pictures of her and Jason's granddad. Jason asks if that is really Granddad. Michelle answers that it couldn't be anybody else. Jason grabs a picture of Granddad in front of a large telescope. He wonders where that was taken. Jason and Michelle turn to the cloth covering the telescope. After they run to it, they start arguing over who gets to use it first. Michelle attempts to settle the argument by saying that since she is the oldest, she gets to decide who uses the telescope first. Jason retorts that the age difference is only five minutes. Michelle says that she can decide that Jason can go first, but she decides that she'll go first. After a few seconds, Jason says that it's his turn now. Michelle replies that she's not even close to being done, and tells him to wait his turn, quietly.

Jason notices the penguin figurines and the ship and gets an idea. He puts the figurines in the ship and yells as loudly as he can while playing with them to distract Michelle. Michelle taunts that she can't hear him. In response, Jason walks as close as he can to Michelle and yells at the top of his lungs. When Michelle does nothing, Jason starts backing up until he trips over a small toolbox and drops the ship. The ship bounces around before finally hovering. Jason tells Michelle what he's seeing, but Michelle doesn't believe him. Zidgel declares that he and his crew need Jason's help. Fidgel galeezels Jason into the ship. Jason can hardly believe that the Penguins are alive. Midgel points out that he's probably daydreaming. Fidgel says that sensors indicate the possibility of Jason daydreaming. Midgel flies the ship off into outer space.

Aboard the Rockhopper, Zidgel introduces himself and his crew to Jason. Jason asks where are they going. Fidgel answers that they received a report on their fax machine that the Planet Wait-Your-Turn is in crisis. When Jason asks what the crisis is, Zidgel answers that they don't know. He then orders Midgel to engage hyper drive. Midgel points out that they're only ten miles away and asks if he was able to read a map. Fidgel comments that if Zidgel was wearing his glasses, he would be able to. Fidgel tells Jason that Zidgel doesn't wear glasses because he thinks they make him look silly. Zidgel retorts that what Fidgel said isn't true, he just doesn't like the red marks they make on his beak. Midgel prepares to land the ship. The landing turns out a little bumpy.

Midgel thinks that being on the planet that's first is good news. Jason suddenly realizes that the cutting in line bug is starting to affect them. Midgel says that the bug affected him first. Fidgel retorts that he was first. Kevin just says that he was first. Zidgel argues that he should have cut in front of them hours ago. Jason warns everyone that they'll all burn once they get too close to the sun. Once the planet starts to burn, everyone starts panicking. The Penguins start fighting over who should enter the ship first until Jason finally speaks up. He repeats what Grandmum told him earlier, including the Bible verse. Zidgel asks what they should do. Jason offers someone else to enter the ship before him. This causes the cutting in line bug to get destroyed and the planet to return to its normal orbit. A vacuum cleaner with a speech disorder informs everyone that President No-I'm-The-President was at the front of the line when the planet suddenly stopped. When Fidgel asked where he is now, the vacuum cleaner answers that he was last seen hurling through space. He then announces that the former President will be succeeded by President After-You. The new President of Planet Wait-Your-Turn thanks Jason and the Penguins for saving the planet. Jason asks what was everyone waiting in line to see. President After-You answers that they discovered a creature spying on them. This creature is revealed to be Michelle, who was looking in the telescope earlier.

After the ship leaves the planet, Zidgel, with a little help from Kevin, recaps how Jason played a part in saving Planet Wait-Your-Turn. Jason says that he couldn't have done it without the Penguins' help. Fidgel tells him that he doesn't really get this whole daydreaming thing. Soon after Fidgel says that, Jason is back in the attic playing with the spaceship. Michelle tells him that she's not finished yet. Jason assures her that he'll look when she's done.

Before Jason and Michelle go to sleep, Grandmum reminds them to say their prayers. Jason and Michelle pray to God to keep their parents safe on their trip. Michelle thanks Him for Grandmum, her cottage, and the telescope that she got to use first. Jason thanks Him for the spaceship and helping him to learn to be patient, and asks Him to teach Michelle something next time. The spaceship is then seen flying past the cottage, suggesting that Jason's adventure might be real after all.

Click here to see the transcript for the commentary. 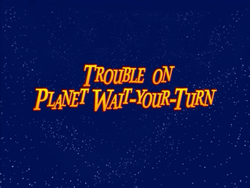