The Yodelnapper! (sometimes known as The Yodel Napper) is the third episode of LarryBoy: The Cartoon Adventures.

LarryBoy is excited over the new Hula Heidi dolls, but Archie is less impressed considering LarryBoy owns all the other "Hula Friends" dolls. LarryBoy is devastated that the dolls are sold out, but Archie tells him that his favorite yodeler, Einger Warblethroat, is performing. However, the performance goes wrong when Greta Von Gruesome kidnaps Einger and takes him to her castle and demands the delivery of all yodelers. With the help of Archie, LarryBoy sneaks into the castle under the disguise of a yodeler. There, he releases the trapped yodelers, but the group falls into a pit and are attacked by an army of Hula Heidi dolls. After defeating the dolls with the help of the yodeler Einger, LarryBoy apprehends Greta Von Gruesome and she is arrested for her villainous actions. The five rescued yodelers then put on a "Tribute to LarryBoy" concert, yodeling the theme song. 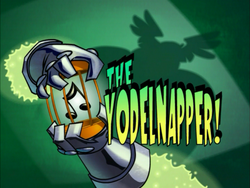