The Yodeling Veterinarian of the Alps

3 minutes, 27 seconds
The Yodeling Veterinarian of the Alps is the ninth Silly Song with Larry.

Larry is portrayed as a veterinarian who believes he is able to cure sick pets simply by yodeling to them. Meanwhile, his nurse is slipping medicine to the pets' owners behind Larry's back.

The Announcer: And now it's time for Silly Songs with Larry, the part of the show where Larry comes out and sings a silly song.

There lived a man so long ago his memory's but faint.

Was not admired, did not inspire, like president, or saint.

But people came from far and near with their afflicted pets.

For a special cure, they knew for sure, wouldn't come from other vets.

Larry: This is a song, for your poor sick penguin.

He's got a fever, and his toes are blue.

But if I sing, to your poor sick penguin,

he will feel better, in a day or two.

Here's a couple penicillin for your sickly arctic bird.

No skeptic could explain just how, nor could one oft rebut,

the wondrous deeds that went on in that little Alpine hut.

Some would stand in silence while some just scratched their scalps.

For the curious ways of the Yodeling Veterinarian of the Alps.

Pa Grape: Good news on the penguin, doc! He's up and kicking.

Larry: This is a song, for your pregnant kitty.

She's looking nauseous, and a week past due.

But if I sing, to your pregnant kitty,

she will feel better, in a day or two.

Pa Grape: (to Bob) Jump in your car, drive into the city.

Buy a jug of milk for your nauseated kitty. (hands Bob a coupon for milk)

The practice grew, their profits flew until one fateful day,

when the nurse who did assist the doc asked for a raise in pay.

The doctor pondered this a while, sat back and scratched his scalp. Then said:

Quartet Singers: To the nurse of the Yodeling Veterinarian of the Alps.

Larry: This is a song, for your bear-trapped teddy.

He looks uncomfy, think I'd be too.

But if I sing, to your bear-trapped teddy,

he will feel better, in a day or two.

Now the moral of our story, it's the point we hope we've made:

When you go a little loopy better keep your nurse well paid!

Some would stand in silence, while some just scratched their scalps,

for the curious ways of the Yodeling Veterinarian of the Alps! 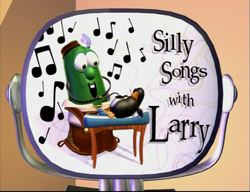 Retrieved from "https://bigidea.fandom.com/wiki/The_Yodeling_Veterinarian_of_the_Alps?oldid=210321"
Community content is available under CC-BY-SA unless otherwise noted.