"Over the past few months, we've asked our loving and loyal fans to cast their votes for their favorite silly song."
— Pa Grape

The Ultimate Silly Song Countdown is the sixteenth episode of VeggieTales and the third Silly Song compilation. The premise was to count down the Top Ten Silly Songs as decided by the show's viewers.

On the Countertop, the Pirates Who Don't Do Anything, comprised of Larry the Cucumber, Pa Grape, and Mr. Lunt, are hosting the show, greeting the viewers to what is known as "The Ultimate Silly Song Countdown." Of course, Larry and Mr. Lunt aren't so thrilled about it, telling Pa that they already did something, but Pa tells them that all they did was order Chinese food. Pa then explains to the viewers that for the past few months, they asked fans to cast their votes for their favorite Silly Song, before introducing them to a device called "The Astonishing Contraption of Silliness," which they will use to tally up the votes for the silliest Silly Song of all time. Mr. Lunt comments that that's a lame name for a machine, but Larry thinks otherwise, saying that he likes it, before offering a won ton to Mr. Lunt. Pa then demonstrates how the ACOS works, before it speeds up a little then malfunctions. Pa then tells Larry and Mr. Lunt to get to work with getting the countdown all ready.

After this song, the ACOS malfunctions again, this time bringing up a non-existent Silly Song called "The Dance Of The Yodeling Cebu Lips," Pa stops the countdown, saying that something must be be wrong with the ACOS, before using a wooden mallet to fix it up again. This time, the ACOS is able to work properly again, bringing up:

Pa then praises that song for being the grandfather of Silly Songs, the one that started the whole thing. Pa then says to pause for a moment of respect, before quickly telling Larry to "Hit it," to which Larry then hits the machine to start it up again. After that, more Silly Songs are brought up again in order of vote:

After this song, the ACOS malfunctions once again, bringing up another non-existent Silly Song called "The Song Of The Water Buffalo Who Don't Love Cebu With Yodeling Lips," Pa shows up with his wooden mallet again, telling the viewers that they are experiencing technical difficulties once again. Pa then tells Larry to come up with one of his Silly Songs while he fixes the machine, but Larry says that he didn't prepare anything. This only frustrates Pa even further, before picking up a Chinese menu and handing it to Larry and Mr. Lunt. Because of that, Larry and Mr. Lunt improvise a brand new Silly Song entitled "Do The Moo Shoo." After the song ends, with Mr. Lunt telling Larry to break the fortune cookie, Larry does so, revealing a fortune that reads, "Beware of grape with wooden mallet." By the time the song ends, Pa has gotten the ACOS fixed up again, telling Larry and Mr. Lunt that the song they sang was a nice song, but it won't make the countdown, before the ACOS brings up more songs by order of vote:

After this song, Pa then tells the viewers that they are now down to two more songs, with one song going home as the loser and the other song going home as the silliest Silly Song of all time. The ACOS then brings up the number 2 song, saying "The Pirates Who Don't..." but Pa quickly stops the countdown, saying that they didn't collect all the votes. Larry and Mr. Lunt tell him that they did, but Pa acts even more apprehensively, asking them if they checked in the closet, to which Larry replies that there's nothing in the closet. Pa then goes off to check in the closet, before returning with a bag labeled "Official Votes," which he then throws into the ACOS. Mr. Lunt claims that he smells something fishy, but Pa tells him that it's just Larry, who offers Mr. Lunt some "kung pao squid," which Mr. Lunt takes a pass on. Before the ACOS can start up again with the number 2 song, Larry and Mr. Lunt stop the countdown again and confront Pa about what he just did. Pa finally admits that he rigged the election, saying that the bag he threw into the ACOS wasn't full of Official Votes after all, as well as the fact that "The Pirates Who Don't Do Anything" was the only song he ever actually had a starring role in. Larry and Mr. Lunt comfort him, saying that number 2 isn't all that bad, before adding that it sure beats the Forgive-O-Matic, before Scallion #1 says from off-screen, "I heard that!" Once Pa realizes that number 2 isn't such a bad position, he asks Larry and Mr. Lunt to forgive him, which they do, before asking the ACOS if it forgives him too, to which it does before telling him not to let it happen again. This time, the ACOS then brings up the number 2 Silly Song:

After this song, the ACOS then brings up the number 1 Silly Song of all time:

Once the silliest Silly Song of all time has been revealed and the countdown over, Larry, Pa, and Mr. Lunt then thank the viewers for voting, before Larry hops up in front of the camera and offers the viewers some kung pao squid, before the episode ends.

Phil Vischer said in a interview that they wanted to create a video of all the silly songs they created through the years for the fans. But they had a hard pick on which is the silliest song, so Phil decided to do a contest for fans on voting their favorite songs. Mike later got involved, and started writing the script. He decided to inject the Pirates Who Don't Do Anything in the episode, since they would be in the Jonah film. Mike stated that there has to be a conflict, so he wrote on them not being the winners. At first, when they did the votes with some friends, they were in seventh place, but when voting became public, they later saw on the votes that the song was being voted the most, next to the Hairbrush song, so they needed some way to keep the conflict. Tom Bancroft, along with Mike and Phil, decided to figure out a way to fix it. They initially pitched that Pa Grape would try cheating, by adding more votes in-between the countdown, similar to what happened during the 2000 election in Florida. Eventually, they decided to let the voting continue a bit more until the numbers changed. 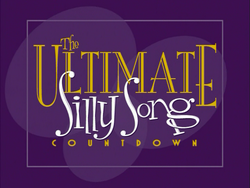