The Toy That Saved Christmas

"Christmas isn't about gettin'; it's about giving!"
— Grandpa George

"The Toy That Saved Christmas" is the sixth episode of VeggieTales and the first Christmas special of the series.

The story is about a little toy named Buzz-Saw Louie who comes to life and wants to find out the true meaning of Christmas.

The show opens on Grandpa George finishing up a bedtime story for his granddaughter, Annie. She asks for another one, but he tells her that she needs to get some sleep, otherwise she will be too exhausted the next day. However, after Annie begs for it some more, George gives in and begins to tell a Christmas bedtime story.

In the story, Mr. Nezzer is the owner of a toy company who, via television commercial, is spreading the word of his newest toyline, "Buzz-Saw Louie," with a working buzz saw built into his right arm and a trigger in his nose that makes him tell kids to get more toys (though delivery is not available in Puggslyville due to the collapse of the bridge linking the paths of the factory and village). After seeing the commercial, the kids of Dinkletown (the town George claims he used to deliver mail to) begin begging their parents for more toys. As Buzz-Saw Louie dolls roll off the production line, one of them inexplicably comes to life and escapes the factory to search for the true meaning of Christmas.

On Christmas Eve, Larry, Bob, and Junior go sledding. They happen upon the escaped Louie, who asks the Veggies for help. Bob suggests that they go see Grandpa George, who reads the Nativity of Jesus from Luke and explains that the true meaning of Christmas is to give, not get. The kids are heartened by the news and plan a way to tell the rest of the people about the true meaning of Christmas before Christmas Day. Larry, Bob, Junior, and Louie sneak into Mr. Nezzer's factory and succeed in avoiding his security guards and broadcast a message using his TV studio's equipment. Shortly after, Mr. Nezzer discovers the group and decides to get rid of them by tying them to a sled and sending them away, though he is interrupted by the families of Dinkletown, who intervene. Realizing the error of his ways, Mr. Nezzer repents after being given a teddy bear as a gift. However, Mr. Nezzer accidentally presses a button and sends the sled with Bob, Larry, Junior, and Louie down through the restricted Puggslyville tube. Panicking, Mr. Nezzer and several of his penguin workers get on their own sleds and give chase in an attempt to save the four. However, Louie saves the Veggies by diverting the sled's course, leaving Mr. Nezzer alone racing toward the broken bridge. Louie and the penguins are able to save Mr. Nezzer just as he is about to fall down the ravine. The story concludes with everybody in Dinkletown, including Mr. Nezzer, getting together to celebrate a Christmas party.

"Billy has more toys than you!"

"The Toy That Saved Christmas" was said to be a very special episode mainly because it proved to be a big challenge for Big Idea. It was made with the same number of people who worked on Dave and the Giant Pickle but it was very hard to make. The episode was made around September of 1996 and at that time, the air conditioning at Big Idea's then headquarters had been shut off and was being replaced. Suddenly, a heat wave had just hit Chicago and the employees pushed themselves to get the episode out in time since they could not ship out the Christmas special late.

As soon as everything was done, Phil Vischer began to suffer major chest pains from a bacteria eating at his heart. He had to stay in bed for the next month until he felt better. 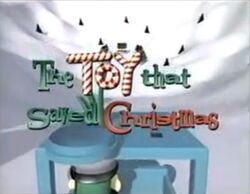 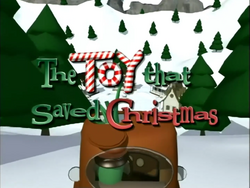