The Story of St. Patrick

The Story of St. Patrick is a story from Sumo of the Opera.

The story starts with the birth of St. Patrick, who was not known as St. Patrick at first, instead referred to by name as Maewyn Succat. As Maewyn grew up, Lutfi explains that he did things that every little boy did, like attend school, play soccer, and attend church. When Lutfi mentions that Maewyn got kidnapped by pirates, Maewyn says that that's not normal, to which Lutfi responds with, "If you were too normal, then you wouldn't have a holiday named after you". The pirates then take Maewyn to Ireland, before they sell him to a druid. The druid then starts calling Maewyn "Pig Boy", because of the fact that he has to feed his master's pigs. Lutfi then also explains that the people of Ireland did not know about God, instead performing a type of practice called "Paganism", in which they prayed to things like twigs and pond scum.

While working for his master, Maewyn begins to realize that even though he is far away from his home in England, God is still with him, so he decides to pray to God, even while working. One day, after being in Ireland for six years, Maewyn decides to run away from his master in order to try to get back home to England, but not without the pigs following after him. Maewyn then approaches a ship, asking the captain if it's heading for England, to which the captain replies that it is, so he lets Maewyn on the ship, though the pigs stow away on the ship as well. The ship then sets sail, but it ends up landing in France instead of England. Because of that, Maewyn, the captain, and two of the captain's mates have to travel on foot across France. After traveling, the group is really hungry but they don't have any food with them. The captain then asks Maewyn to pray for food, which he does, just as the pigs show up. When the pigs realize what's happening, they end up getting turned into ham, with one of the captain's mates praising it as a miracle. The captain then thanks Maewyn for saving them, but Maewyn tells him to thank God, which the captain and the mates do.

After arriving back in England, Maewyn is able to return home to his family and friends again. Lutfi then explains that while Maewyn slept, he dreamt that the people of Ireland were begging for him to return to Ireland and teach them about God, which Maewyn agrees to, as soon as he finished school. After Maewyn has finished school, he has studied to become a bishop, and got his name changed to Patrick, with Lutfi telling him that the St. part comes much later. Soon, Patrick has gone back to Ireland, where he explains to the people of Ireland all about God. After a bit of misunderstanding, in which the people of Ireland pray to the shamrock that Patrick is using in his demonstration, he tells that God is like a shamrock because he is three persons in one, which are God the father, God the son, and God the holy ghost. Once the people of Ireland fully understand this, they decide to turn to God. Lutfi then explains further that on March 17th in the year 460, Patrick died at the age of 73, and that his name was changed one last time, this time to St. Patrick, which is the reason why on March 17th, people celebrate St. Patrick's Day. 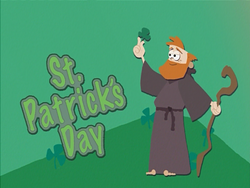 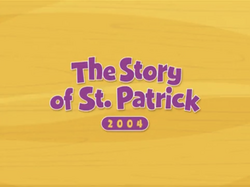