The Story of Flibber-o-loo is a story told by Bob about two rival cities named Flibber-o-loo and Jibber-de-lot. It is based on Jesus' parable of the Good Samaritan, styled like the works of Dr. Seuss.

The story is told entirely in rhyme, where Bob explains that in the mountains of Fibble, there are two tiny towns. One town is called Flibber-O-loo, where everyone wears shoes on their heads, while the other town is called Jibber-De-Lot, where the headgear of choice is a pot. The two towns fight over headgear, and would throw their respective headgear at each other often. However, one Flibbian does not care about all the fighting going on around him, preferring to play with his pet blue plastic wind-up lobster.

One day, the boy and his lobster decide to go out on a little walk in the valley between the two towns. However, he ends up in the sights of of a trio of bandits, before they attack him, steal his milk money, and stick him upside down in a hole. After the bandits leave, the boy is left alone. At that moment, the mayor of Flibber-O-Loo happens upon the boy, making note that he too is from Flibber-O-Loo. However, while the mayor explains that he would be glad to help, he explains through song that he is much too busy to help him out.

After the mayor finishes his song, a doctor from Flibber-O-Loo also comes along, but she gets into a conversation with the mayor about their jobs. When the boy interrupts, asking if either one of them would be kind enough to help him, both the mayor and the doctor explain once again in song that they are much too busy to help him out. After they finish singing, they then leave, leaving the boy still stuck underground. However, a third person comes along, a young boy with a pot on his head from Jibber-De-Lot. The boy from Jibber-De-Lot makes note of the boy from Flibber-O-Loo looking beaten and bruised. He originally is against helping him since the citizens of Flibber-O-Loo treat them like trash, but ultimately decides to help him out before taking him back to Flibber-O-Loo.

At the doctor's office, the doctor of Flibber-o-Loo is surprised to see that a citizen of Jibber-De-Lot has actually helped someone from Flibber-O-Loo. When she asks the boy from Jibber-De-Lot why he did it, the boy with the pot explains that even though they're from different towns and that their headgear is different, God wants us to love our neighbor. After singing this song, the boy with the pot gives the doctor some money to cover the Flibbian's medical bills. The mayor finally understands that even though one person is from one town while another person is from the other, they should learn to get along with each other. Because of that, Flibber-O-Loo and Jibber-De-Lot have now become friends, throwing flowers and candy at each other. 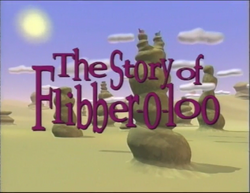 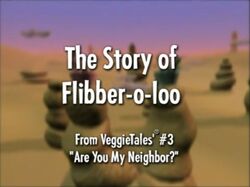 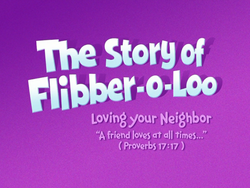 Retrieved from "https://bigidea.fandom.com/wiki/The_Story_of_Flibber-o-loo?oldid=209806"
Community content is available under CC-BY-SA unless otherwise noted.