The Star of Christmas is a book adaptation of the episode of the same name.

This beautifully illustrated book is an adaptation of the new VeggieTales Christmas story, The Star of Christmas. Two well-meaning veggies (Bob and Larry) want to teach the city of London about love. And what better way that to "wow" a crowd than with a wonderful spectacle filled with electric lights on Christmas Eve!

But the local church is planning its own Christmas Eve pageant that will feature the highly valued, sixth century piece of metalwork, "The Star of Christmas of Canterbury." When Bob and Larry get wind of the pageant and realize that everyone wants to see the star, they decide to "borrow" the star for their production!

Things go from bad to worse as they attempt to pull off their extravaganza in time for Christmas Eve! But in the end, these fun and wacky vegetables learn a lesson about real love and the birth of Jesus as the true meaning of Christmas shines through. 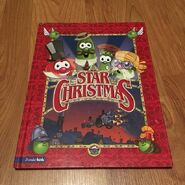 Add a photo to this gallery
Retrieved from "https://bigidea.fandom.com/wiki/The_Star_of_Christmas_(book)?oldid=121749"
Community content is available under CC-BY-SA unless otherwise noted.