The Scallions are a trio gang who are recurring antagonists (but sometimes anti-heroes) in VeggieTales.

The Scallions are a bunch of green scallions who first appeared in "Daniel and the Lion's Den" on "Where's God When I'm S-Scared?". They're known for the wisemen, milk money bandits, salesmen, and the quartet singers with Frankencelery.

Scallion #1 is the tallest of the trio. He is a slender scallion with purple eyelids, a long, purple nose, has a British accent and used to wear black eyeliner. He also wore a gold crusted belt with a red jewel. In earlier episodes, his stalks stick straight up like his two counterparts. In later episodes, his stalks were combed back. 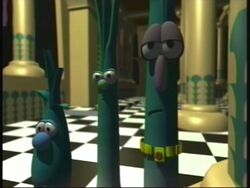