The Mystery of Veggie Island is a PC game released by Big Idea on September 15, 2002.

The Veggies go to Veggie Island, a far-out island in the ocean, where they practice earning their merit badges by helping others. However, their canoe gets lost at sea, stranding them on the island. How will they get off? Find out in this PC game. 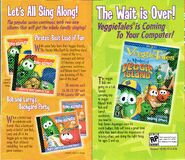 Add a photo to this gallery
Retrieved from "https://bigidea.fandom.com/wiki/The_Mystery_of_Veggie_Island?oldid=187093"
Community content is available under CC-BY-SA unless otherwise noted.