The Mission was a game on Larry-Boy.com. It was a promotional online game tie-in to Larry-Boy and the Rumor Weed, and acted as a sequel to the film. The story was notable for featuring the returns of both the Fibs and Rumor Weeds. The game follows an original story as LarryBoy finds a note written by Alfred, stating that the asparagus needs "help," and races through Bumblyburg in the LarryMobile, LarryPlane, and on foot, facing Fibs and Rumor Weeds along the way, to save Alfred at the Bumblyburg Aquarium, only to find that Alfred's penmanship is not terribly keen, and he meant to say that he needed kelp, not help. The story ends with Larry and Alfred staring into the sunset.

Larry the Cucumber walked down the hallway of the Larry Manor. "Alfred, where are you?" he said loudly. His butler, his friend, was nowhere to be found!

"It's been a long day of fighting crime in Bumblyburg, and now I can't find my slippers," Larry said. "Um … Alfred!"

All was quiet in the Larry Manor, as Larry hopped from room to room looking for the missing asparagus. Finally, he hopped into the Larry Kitchen, and found a note sitting on the table.

Gone to the Bumblyburg Aquarium with an emergency! Meet me on the roof... I Need Help!!

Alfred needed HELP! "He must be in trouble," Larry thought. There's only one superhero cucumber who could help. Alfred needed a hero! But not just an ordinary hero, no … a special hero! A superhero! Larry dashed downstairs to the secret Larry-Cave to become … Larry-Boy!

Larry-Boy jumped into the Larry-Mobile and raced down the road toward the Bumblyburg Aquarium. "Don't worry about a thing, Alfred!" he said. "Help is on the way!"

Larry-Boy raced down the highway toward the city, wondering what sort of trouble Alfred could be in. Whatever it was, he was sure he could handle it.

But up ahead — uh oh! A traffic jam! Larry-Boy didn't have time to sit in traffic. Alfred needs help! With super-quick thinking, Larry-Boy pushed the yellow button to transform the Larry-Mobile into the Larry-Plane!

The car's plunger wheels shot off and away as the Larry-Plane's wings extended out. Larry-Boy zoomed up into the sky!

Larry-Boy finally made it to downtown Bumblyburg! He landed his plane on top of the Bumblyburg Police Headquarters, still thinking about his friend in trouble. Now the roof of the Bumblyburg Aquarium is just a few superhero hops away!

"Alfred, there you are!" Larry-Boy shouted as he saw his friend. Larry-Boy was out of breath by now! "I got your note, and I'm here to help!"

"What?!?" said Larry-Boy. "I came all this way, I fought giant Fibs and nasty Rumor Weeds, I dodged taxis and leaped across all of Bumblyburg — and you want seaweed?"

"Yes, er — sorry about that. I suppose my handwriting could use a little improvement."

Larry-Boy smiled at Alfred, and the two started laughing. As the sun set over Bumblyburg, Larry mumbled, "It isn't RUMOR seaweed, is it?" 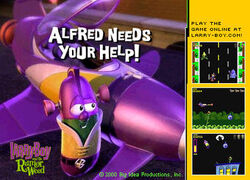