The Lizard King is one of the kings of Bullamanka. Outside of the planet, he is best known for driving the Space-T Freeze ship. He serves as the main antagonist in the episode The Cheating Scales of Bullamanka and one of the tritagonists in Hogs and Kisses.

He was known for cheating in a tournament of Squid-Tac-Toe with the Bandicoot King. After the Bandicoot King lost (due to the Lizard King cheating thanks to his henchmen), he ended up in a cage. The Rockhopper crew later came to arbitrate the tournament, and he later agrees to have a rematch with Michelle after overhearing a conversation about her being a champion (albeit with three of the game pieces replaced with Zidgel, Midgel, and Fidgel and Kevin as the Squid-Hopper). However, he still manages to find ways to cheat. Before her friends were sent down the Gurgler, Michelle tells him what he's been doing is wrong. The Lizard King eventually changes his ways and decides to restart the game.

He later encountered Jason when he got inside his Space-T Freeze ship.

Before his reformation, the Lizard King was dishonest, competitive, and did not hesitate to carry out any of his plans.

After his reformation, he shows genuine concern for anyone he suspects is in some sort of danger.

The Lizard King is an alien lizard. He is somewhat based on a Frill-necked lizard, as his neck frill pops up whenever he's angry. His nose, mouth, and center of his body is a lighter shade of greenish turquoise than that of the rest of his body. He has small light green spots on his arms and tail. He wears a brown hat, a belt, and thick leather gloves.

He is known as one of the best players of Squid-Tac-Toe, and he can speak in a fast manner. 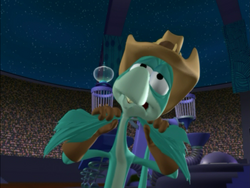 Retrieved from "https://bigidea.fandom.com/wiki/The_Lizard_King?oldid=207695"
Community content is available under CC-BY-SA unless otherwise noted.