3 minutes, 6 seconds
The Hairbrush Song is the second Silly Song with Larry, and is also Larry's signature song.

Larry is done with morning bath, when he notices that his hairbrush is missing.

The Announcer: And now it's time for Silly Songs with Larry, the part of the show where Larry comes out and sings a silly song. (starts narrating) Our curtain opens as Larry, having just finished his morning bath, is searching for his hairbrush. Having no success, Larry cries out...

Announcer: (continues narrating) Having heard his cry, Pa Grape enters the scene. Shocked and slightly embarrassed at the sight of Larry in a towel, Pa regains his composure and reports ...

Pa: I think I saw a hairbrush back there! (He leaves.)

Announcer: (narrating; cntd.) Having heard his joyous proclamation, Junior Asparagus enters the scene. Shocked and slightly embarrassed at the sight of Larry in a towel, Junior regains his composure and comments ...

Junior: Why do you need a hairbrush? You don't have any hair! (He leaves.)

Announcer: (narrating; cntd.) Having heard his wonderings, Bob the Tomato enters the scene. Shocked and slightly embarrassed at the sight of Larry in a towel, Bob regains his composure and confesses ...

Announcer: (narrating; cntd.) Having heard his lament, the Peach enters the scene. Himself in a towel, both Larry and the Peach are shocked and slightly embarrassed at the sight of...each other. But recognizing Larry's generosity, the Peach is thankful ...

Peach: Thanks for the hair-brush!

Announcer: (narrating) Yes, good has been done here. The Peach exits the scene. Larry smiles, but, still feeling an emotional attachment for the hairbrush, calls out ...

Announcer: (ending his narration) The end! 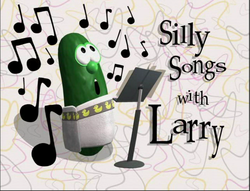 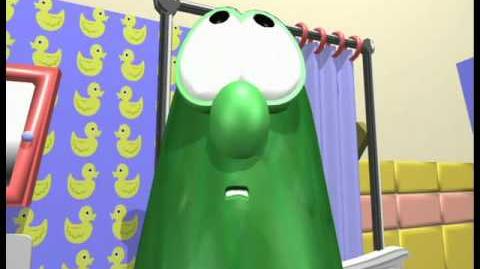 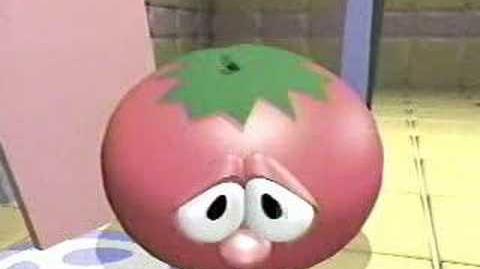 Japanese Hairbush Song
Add a photo to this gallery
Retrieved from "https://bigidea.fandom.com/wiki/The_Hairbrush_Song?oldid=200734"
Community content is available under CC-BY-SA unless otherwise noted.