The Gourds Must Be Crazy

The Gourds Must Be Crazy is the second half of Are You My Neighbor? and is the sequel to Tales From the Crisper.

One night, Junior talks to his dad on who he wants to invite to his birthday party. Dad suggests inviting a new kid named Fernando. Junior doesn't want him to come because he talks funny. Dad says that he talks different since he is from a foreign country. Dad tells Junior to think about inviting Fernando over the night. As dad leaves Junior's bedroom, flashing lights begin to enter Junior's bedroom. The lights belong to a small spaceship that flies into Junior's room. The spaceship belongs to Captain Bob and Lieutenant Larry. They've come to seek Junior's help fixing the power to their starship, the USS Applepies (USS Enterprise) before the ship gets blown away by a giant meteor. They take Junior with them and head out in outer space.

At the USS Applepies, Junior is greeted by the ship's engineer Scooter (Scotty). He says there is only five minutes left until the ship and its 364 passengers are destroyed by the meteor. The crew also learn that the meteor is made entirely out of popcorn and that there is only two escape pods available on the ship. As everyone begins to worry, they soon meet the new recruits on the ship, Jimmy and Jerry Gourd. Scooter says that they do nothing but eat and sing all day. As Junior meets them, he learns that they could eat almost anything, including a planet. Inspired by what they said, Junior asks if the gourds are willing to save the ship. They agree and they're taken to the two escape pods.

As they are cast out in outer space, Jimmy and Jerry hit the popcorn ball meteor and begin to eat every bit of it. As the crew wait and hope that the two gourds ate very bit of the meteor, they begin to fear of the upcoming destruction. As the time runs out, Jimmy and Jerry eat every last bit of popcorn and are congratulated by everyone because of their differences. Jerry soon finds a unplugged cord and plugs it back in, restoring the ship's power. They're congratulated more and the gourds begin to sing a song.

After the song, Bob and Larry take Junior home. Junior calls his dad and tells him that he will invite Fernando to his birthday party after learning the importance of being different. Dad is proud of Junior's decision and leaves the bedroom. Soon, Bob and Larry come back to Junior to ask him for directions to the freeway. Junior tells them to go out the window, down the street, and left on Mr. Slushy. Bob and Larry leave the house and resume their travel. 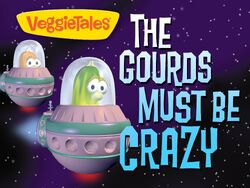