"When two work together, they are stronger than one."
— Bok Choy's advice

The Good, the Bad, and The Eggly is the fourth and final episode of LarryBoy: The Cartoon Adventures. This episode was also adapted into a book. 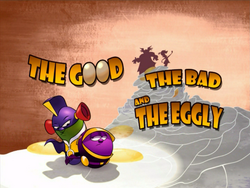 Retrieved from "https://bigidea.fandom.com/wiki/The_Good,_the_Bad,_and_the_Eggly?oldid=210944"
Community content is available under CC-BY-SA unless otherwise noted.