Phillipe & Jean-Claude are The French Peas in VeggieTales.

In Jean-Claude's debut episode, he was one of the main Philistines along with Christophe, where they were fighting against the Israelites with their greatest weapon, Goliath. However, they have defeated thanks to Dave.

In the next episode, he was paired up with Phillipe and they were guarding the walls the Jericho. They discovered that Joshua and the Israelites wanted to cross the wall, but the peas refuse them to and dropped slushies on top of them. But they were defeated when the walls came down, crushing them along with the rubble.

Jean-Claude and Phillipe are very cheeky and mischievous.

Jean-Claude and Phillipe are green peas with freckles. Because they look very alike, it's hard to tell who is whom. The difference with them is their voices, as Jean-Claude's voice is low and raspy, while Phillipe's is high and smooth.

For VeggieTales in the City and VeggieTales in the House, they gained a different appearance so viewers can figure out which one is which. Jean-Claude is bright green and has a red nose with a mustache. He also gained cartoony-type eyes and eyebrows. Phillipe is dark green and has an orange nose with a french-style mustache. He also gained a thin unibrow.

Finally, in The VeggieTales Show; they go back to their original design. 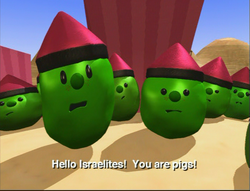