The Englishman Who Went Up a Hill (and Came Down with All the Bananas) is a short story presented by Jimmy and Jerry from King George and the Ducky.

In the play, Scallion #1 is dressed up as an Englishman who went up a hill and came down with a whole bunch of bananas, thus leaving all the inhabitants of the hill with no bananas and bestowing the term selfish upon himself. Also, he refuses to eat one without a strawberry. On the other side of the stage, Jerry dressed as a Swede has done the same thing, except he has done it for a whole bunch of strawberries. Jimmy appears briefly and tries to correct him that he's not Swedish, but is interrupting the play, so as soon as the music stops, Jerry shushes him, prompting him to move off the screen to the left and let the play resume. And, somewhat like Scallion #1 who won't eat a banana without a strawberry; he refuses to eat a strawberry unless he has a banana. The two gentlemen see the fruit they have and they won't share their fruit with each other and as a result, they are stuck. 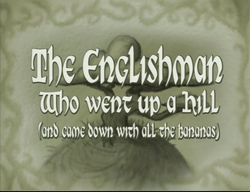 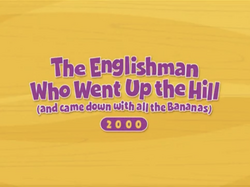 Retrieved from "https://bigidea.fandom.com/wiki/The_Englishman_Who_Went_Up_a_Hill_(and_Came_Down_with_All_the_Bananas)?oldid=203691"
Community content is available under CC-BY-SA unless otherwise noted.