The End of Silliness?

The End of Silliness?, also known as Silly Sing-Along 2, is the eleventh episode of VeggieTales and the second sing along video.

This episode is set after the events of Madame Blueberry.

Sometime after the last episode in which Archibald Asparagus had cancelled Silly Songs with Larry, Larry, having detoured to Jimmy's ice cream parlor on a stormy night, is in a state of depression over the new change, and gives himself an ice cream headache after drowning his sorrows in ice cream sundaes. Inside the ice cream parlor, Jimmy is washing some plates. After flashing back to the events during and after "The Song of the Cebú," Larry begins to toss and turn in great stress, which gives Jimmy no choice but to sedate him as the scene cuts off.

As the scene returns, Jimmy is able to snap Larry out of his stress after sedating him and asks if he's okay. Larry replies such and tells Jimmy to press G7 on the video music player, explaining how he was performing "The Song of the Cebú" when things went awry.

At the end of the song, Jimmy laughs, finding the song funny, but Larry's angry stare quickly puts him off of laughing any more. After Larry tells him it wasn't his fault that Photo Hut had mixed up his slides, Jimmy assures him messing up on one song isn't the end of the world. Soon after, a mysterious man in a trench coat, followed by a woman with red hair wearing a red dress, walks in. However, the man's face is obscured by the turned-up collar of his coat, before he places his briefcase on the counter. Jimmy then tells the man and the woman that he'll be with them in a minute before he goes back to the jukebox and pushes a few more buttons on it. As he returns to service the man and woman who just entered, the jukebox plays some more songs.

Larry is now more down than ever, singing "It Isn't Any Trouble to Just S-M-I-L-E" while sobbing, which Jimmy admits seems to be a result of choosing the wrong song. The mysterious man is at first stern but becomes mildly sympathetic once he sees how Larry feels. Jimmy plays more songs on the jukebox and is amused by them, however, Larry is still unhappy. When Jimmy wants to know why Larry is so down in the dumps, the mysterious man reveals himself as Archibald Asparagus, saying that he'll tell him what's going on. Larry is surprised, but also furious, that Archibald has appeared. Archibald approaches the jukebox and brings up the previous episode's song, including the part that saw Archibald declare that Silly Songs is to be cancelled until further notice, which horrifies Larry.

Jimmy becomes shocked and appalled at Archibald's treatment of Larry and says that he too would feel the same way if someone took his songs away. Archibald attempts to explain himself, saying that he believed he was acting in the public's best interest, while Jimmy can only give him a rather scornful look. Archibald opens up the briefcase that he had brought with him and reveals a petition that 167,512 fans had posted, asking that "Silly Songs with Larry" be brought back and that Archibald should obviously forgive and forget all about "The Song of the Cebu" incident. Archibald hops on the counter and elaborates that the silliness is just beginning, before fainting. Picking himself back up, he tells Larry not to be too silly. Larry is finally cheered up as he plays a new silly song on the jukebox.

Archival Footage (in order of appearance) 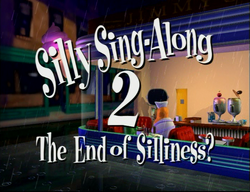