The Doom Funnel Rescue! is the fifth direct-to-video episode of 3-2-1 Penguins!

Some mail gets delivered to Grandmum's cottage. Jason challenges Michelle to a race to the mailbox. She thinks about this for a few seconds, and after she starts to run, agrees. Jason, running after her, tells her that it is no fair that she got a headstart. After Michelle gets the mail, Jason tells her he needs to hear something from the outside world or else he will crack. Michelle ponders this for a while and checks which letter is his. Jason is not patient enough for Michelle to find his letter, so he attempts to grab the stack of envelopes from her. Grandmum then comes in and asks what is going on. Jason answers that Michelle will not let him see the mail. Grandmum tells Michelle, "Do not withhold good from those who deserve it when it's in your power to act." She tells her that it also applies for the mail. Michelle responds that she was going to give it to them. Grandmum gets the stack of envelopes and gives a card to Michelle and a letter to Jason. The envelope contains a picture of Trevor on the anti-gravity simulator. However, Michelle does not understand why a bunch of kids would wait in line just to get nauseous. Grandmum decides to have all of them read their mail over some prune trifle.

In Grandmum's cottage, Jason reads his letter from Trevor. The letter contains Trevor giving details about how he learned about space storms and how he and Jason went to Astroland to ride the Twister 28 times in a row. Trevor concludes his letter by saying how he wished Jason was with him and tells Jason to write to him and tell him all the fun things he is doing. After he reads his letter, Jason lies down on the sofa doing nothing. Michelle informs Grandmum that the sink is leaking. Grandmum gets some duct tape and says to Jason that it was nice of Trevor to write to him and that he probably misses him. She advises him to write him back to tell him what he has been doing. Michelle agrees with Grandmum and gives Jason suggestions on what to include in his letter, like the paperclip chain he made, helping Grandmum put on her hair net, and that morning when they ran out of toast. Jason brushes Grandmum's advice off, thinking that Trevor is having too much fun to even consider reading any letters from him. Grandmum tells Jason that Trevor might be a little homesick and hearing from him might make him feel better. Jason decides to go upstairs with a plate of cookies. Grandmum hopes he will do the right thing.

Upstairs in the attic, Jason looks over his box of collections. He is about to grab a cookie when he notices that some cookies have gone missing. He sees a trail of crumbs leading towards a cardboard box. Pretending to be Captain Manolo, he sneaks up to the box following the trail and moves the box to reveal a small grey mouse eating a cookie.

Later on, he builds a home for the mouse he named Preston. He offers to show him his treasure box. He shows Preston various things like a coil, a decoder ring, and a smash penny. Michelle walks up to the attic and asks who Jason is talking to. Jason immediately hides Preston in his shirt. He asks Michelle why she does not play with her doll. Michelle answers that maybe she does not want to, and asks Jason why he does not answer Trevor's letter as she pokes him where he hid Preston. She hears a squeak. Jason then reveals Preston to her. Michelle introduces her doll, Miss Pretty-Pretty, to Preston and says Preston is a new guest for her tea party. Jason objects to this, saying that Preston is a man's mouse. Michelle states her hope to expose Preston to a little culture. Jason says that Preston does not need culture, he needs space adventure. Michelle replies that if Preston changes his mind, she will be hosting a tea party. With Preston in the Penguin's ship, Jason counts down to blastoff. However, Preston gets frightened and hops out of the ship. The ship comes to life and Preston lands on the ship's lid. Zidgel exclaims that Preston is on the lid. Midgel rolls his eyes and opens the lid, throwing Preston off the ship. Jason turns to look for him. Zidgel orders Jason to report for duty. Jason tells Zidgel to give him a minute because he needs to find Preston. Zidgel replies that there is no time, as they have an urgent mission. He orders Fidgel to galeezel him. As Jason is looking for Preston, he gets galeezeled and the ship flies off towards their next mission.

While the ship is flying in space, Zidgel says to Jason that their mission is a highly classified one. He asks Kevin to activate a slideshow. Zidgel presents some of his baby pictures to Jason. Confused, Jason asks about the mission. Fidgel explains that they are heading for Space Colony Doublewide due to being doom funnel season there. And their cargo is emergency duct tape. The duct tape is for lashing space colony modules together to prevent them bashing against each other in high winds until they are completely smashed. If they do not arrive in time, the population is doomed. Jason, Midgel, and Kevin gasp in horror. Zidgel, on the other, just wants to show more of his baby pictures. Midgel looks at the gas dial and notices that it is nearly empty. Midgel says to Zidgel that he told him he prepared everything for the mission. Zidgel replies that he did, and he stored it all in his bag. Midgel tells Zidgel that he said he got gas. Zidgel says that he did, but he is feeling much better now. Midgel yells that he meant rocket fuel. Jason suggests that it would be a good idea to get some more fuel before they run out. Zidgel agrees with his suggestion. Fidgel sees a nearby gas station on a map. Midgel turns the ship and heads towards it. Fidgel gets a pair of binoculars and sees another gas station where gas is two cents cheaper. Midgel changes the ship's course. Fidgel investigates the gas station further, and notices a giant tank with various warning signs pasted on it. Fidgel tries to tell the captain about this. Zidgel goes to see the tank for himself. When Fidgel tries to tell Midgel about the tank, he panics. Zidgel tells Fidgel to pipe down as he sees the tank with the binoculars the wrong way. He thinks the tank is miles away until Fidgel flips the binoculars around and he too starts panicking. Midgel ignores Jason, Fidgel, and Zidgel panicking as he drives the ship to the gas station. Just as the fuel runs out, the ship lands in the gas station.

Kevin walks out of the ship as Zidgel tells him what kind of snacks he should buy. After the ship is fueled up, Kevin returns to the ship and gives the rest of the crew their snacks. Kevin then puts his hand in the bag and takes out a round robot named B.I.N.G. Jason presses the button to activate it. The flash from the activation causes Kevin to shield his eyes from the brightness. B.I.N.G. imitates his actions. Fidgel notices that B.I.N.G. has imprinted on Kevin's behavior, just how a newly hatched duckling does with the first creature it sees.

Later, Kevin introduces B.I.N.G. to Midgel, telling him that he has fifteen buttons. Midgel explains what his buttons do, but Kevin butts in and points to the button that makes the ship go super fast. B.I.N.G. presses it even when Midgel tells him not to. The ship starts flying at a high speed until Midgel tells him to stop. When the ship stops, Midgel comments on how fast they traveled.

B.I.N.G. then switches some of the buttons on the place where Fidgel sometimes works. Fidgel compliments B.I.N.G.'s ability. Kevin introduces B.I.N.G. to Jason, who does not have any buttons, unless his belly button counts. Zidgel, who has a very big button, is introduced to B.I.N.G. Kevin asks if B.I.N.G. can help him with any captain problems he has. Zidgel ponders for a moment, then B.I.N.G. styles his hair in three different styles before going back to the original one. Jason, Fidgel, and Kevin only like the original hairstyle.

After a while, Jason and Kevin use B.I.N.G. as a basketball. B.I.N.G. shoots himself into the basketball net, earning Jason a slam dunk. Zidgel and Midgel talk about how B.I.N.G. is now Kevin's best friend. Fidgel informs Zidgel that they are reaching Space Colony Doublewide. Zidgel is about to order his crew to buckle up for landing when Fidgel's instruments are indicating a doom funnel with a force 200. Zidgel exclaims that a doom funnel that powerful happens only once every three gazillion years, and not until June. Midgel points to the doom funnel at the space colony.

Back at Grandmum's cottage, Jason looks for Preston. He hears Michelle's voice in their bedroom and sees Michelle hosting a tea party and Preston wearing a wedding dress.

Later on, Jason writes to Trevor. He ends his letter by saying he found a mouse he named Preston and quoting what Midgel said about a best friend. He puts a smash penny in the envelope for Preston in case he is homesick.

That night, Michelle asks God to bless Grandmum and to keep her parents safe on their trip. Jason thanks Him for teaching him the importance of doing good deeds for others whenever he has the chance. He asks Him to watch over Preston, who he says is a great mouse even though he ate the bridal bouquet. 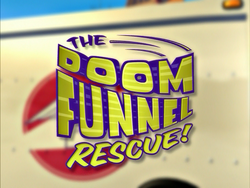