"What a lame name. Who came up with that?"
— Mr. Lunt, The Ultimate Silly Song Countdown

The Astonishing Contraption of Silliness is a contraption that only appeared in The Ultimate Silly Song Countdown. Its' purpose is to tally all the votes on the Silly Songs, and counts down the songs from the least to best votes. However, it's not always in perfect working condition, and can sometimes malfunction, such as saying the title of a song that doesn't exist and often breaks down. Pa Grape sometimes has to fix it, usually using a wooden mallet to whack it.

Despite being sentient, it does have feelings and forgave Pa on rigging the votes, and told him not to do it again.

It's unknown who exactly built it, but according to a pamphlet on the Silly Songs with Larry album, Larry bought it from the Lorax off of eBay.[1] 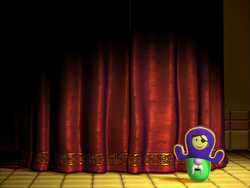 Retrieved from "https://bigidea.fandom.com/wiki/The_Astonishing_Contraption_of_Silliness?oldid=189198"
Community content is available under CC-BY-SA unless otherwise noted.