Start a Wiki
Tales from the Crisper is the first segment of Where's God When I'm S-Scared?, and the very first story of the series.

Junior Asparagus is watching a late night Frankencelery movie and is frightened. Mom Asparagus comes to tell Junior that it's his bedtime. Junior heads upstairs stating that the movie didn't frighten him, but as he walks up the stairs, he sees his family portrait come to life with bolts coming out of their necks and mean expressions on their faces. Scared out of his mind, Junior races up the stairs and runs into his bedroom.

In his bedroom, Junior lies in bed still trying to deny that he isn't afraid. He then hears loud thumping on the ceiling. All of a sudden, two figures crash through the ceiling and land in Junior's bedroom. The figures turn out to be none other than Bob and Larry. They say that they have come to help Junior with his fear. Junior tells them that he wasn't afraid one bit. Bob takes that as something that really happened and says that they were going to sing him a song but they'll go on and leave. But Junior demands them to sing the song because he still wants to hear it, so they do as he says, but it turns out to be scary and it frightens Junior a little more. However, they relieve the scaring with the song God is Bigger. Junior doesn't understand what message the song is trying to deliver and Bob and Larry have Junior come by his window. They ask him what is out the window and he sees a lot of stars. Then they say that since God is the ultimate creator of the earth he takes extra care of his creations and that there is no need to be afraid.

All of sudden, Frankencelery jumps through the ceiling which scares Junior into jumping and hiding in his toy chest. But Frankencelery says that his real name is Phil Winklestein and that he is a famous actor from Toledo, Ohio. He says that he was being scary as part of his job and that he is a nice guy in real life. Now relieved of his fear, Junior comes out and he and everyone sings a longer version of God Is Bigger. After the song, Bob, Larry, and Phil suddenly disappear and Junior's dad has heard all the noise so he comes in to check on him. Junior tells him that he is no longer scared for he knows God is always out there looking for him. Junior's dad agrees with what Junior said and tells him to be careful on what to watch on television in the future. Junior's dad says goodnight to Junior and he soundly goes to sleep. 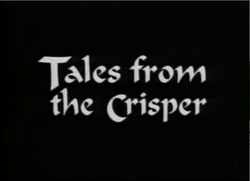 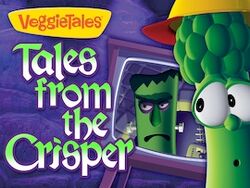 Retrieved from "https://bigidea.fandom.com/wiki/Tales_From_the_Crisper?oldid=180103"
Community content is available under CC-BY-SA unless otherwise noted.