Stuff-Mart Suite (also known as the Salesmunz Rap) is the second song from Madame Blueberry.

Salesman #1: Allow us to introduce ourselves, We're neighbors.

Salesman #2: We moved in down the street!

Salesman #1: Some say we're the most delightful bunch of fellows-

Salesman #1: And if you have a moment to spare, Kind lady with beauty so... rare, We'd like to take a minute or two on a topic of interest to you.

Salesmen: We represent the Stuff Mart.

Salesman #2: An enormous land of goodies.

Salesman #1: Would you mind if we stepped in, please?

Salesmen: And as associates of the Stuff Mart...

Salesman #1: It looks like you could use some stuff!

Madame Blueberry: Oh yes! Well as I was saying I-

Salesman #1: I pray that you won't take this wrong, my dear, But initial observation is as follows: The criminal responsible for this decor really should be hanging from the gallows!

Salesmen: We represent the Stuff Mart.

Salesman #2: A magic land of retails.

Salesman #3: Would you care to see what's on sale?

Salesmen: Then as a customer of the Stuff Mart...

Salesman #1: Get ready for some real nice stuff!

(music changes to a rap)

Salesman #1: If you want a big hat

Salesman #1: If you need a tube of glue

Salesman #2 and #3: They're in stock! And if you need refrigerators to keep extra mashed potatoes, or a giant air compressor to blow fruit flies off your dresser, Or a dehydrated strudel, Or a nose ring for your poodle, Or a five pound can of tuna and some flippers to go scuba. Scuba! Scuba! Scooby-doo-be-doo-ba! Here we go, scuba! Come on!

Salesman #1: If you need a rubber hose

Salesman #2 and #3: Gotta check. But if you need a window scraper and a gross of toilet paper, Or a rachet set and pliers, and surround sound amplifiers, and a solar turkey chopper, Or a padded gopher bopper, Flannel shirts for looking grungy and some rope for goin' bunji. Bunji! Bunji! Bunji-wun-gee-fun-gee! Here we go, bunji! Come on!

(music changes back to normal)

Salesman #1: What we've mentioned are only just some.

Salesman #2: Of the wonderful things yet to come.

Salesman #1: These pictures you keep are so... Nice.

Salesman #3: But you really should take our advice.

Madame Blueberry: So if I buy more things… that will make me happy?

(Salesmen nods heads, while Blueberry looks at Bob and Larry. Larry shrugs, while Bob is displeased)

(Gets close to Bob, and starts arguing)

(They both starting yanking Blueberry's purse, with her pulling her purse back)

(The purse flies out of their grips, and lands in front of the other two Salesmen, with a lipstick rolling out)

Madame: How could I afford not to? 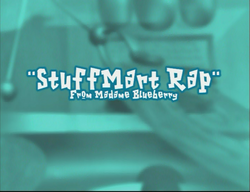 Retrieved from "https://bigidea.fandom.com/wiki/Stuff-Mart_Suite?oldid=162982"
Community content is available under CC-BY-SA unless otherwise noted.