This list is for characters who are students of Bok Choy's Super Hero Class.

Click here to see more information about The Scarlet Tomato

Bubble Gum is one of the students at Super Hero class who has the ability to stretch his own body in many lengths!

He gained this ability while as a cadet in the Veggie Space Program at Cape Cantaloupe when he was exposed to cosmic rays. Other than stretching like gum, he could also blow enormous, perfect bubbles as well! He went to win the world bubble-blowing championships three years straight, to the Great Despair of Russians.

Bubble Gum is a green celery with dark green hair.

His costume is a purple disco-looking outfit with a medallion.

As stated, he can stretch through anything and can blow bubblegum.

He appeared numerous time in the series, though the only speaking role he has is in Leggo My Ego. 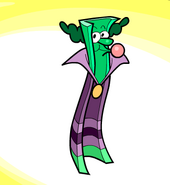 The most good-natured superhero in the world, Sweet Potato's superpowers are her incredible strength and her perfect white teeth. During the day, she works as a bouncer in a retirement home. She was one of the students that got electrocuted by Electro-Melon when he lost his tempter

Obviously as the name suggest, Sweet Potato is, well, a sweet potato with orange hair and pink dimples.

Her costume is somewhat based on a cheerleader's outfit with with a cape, a pink mask, and the initials SP stamped.

As stated in Bumblyburg Map, she has superhuman strength.

She appeared numerous time in the series, though she didn't have a speaking role.

A hot-headed youth with blazing breath, Hot Tamale's exhalations never fail to bring hardened criminals to their knees. He discovered his superpower as a small child, when his physicist father brought him to work. Young Tamale accidentally fell into the nuclear reactor, clutching his lunch of chips and salsa, he emerged as...Hot Tamale!

Despite what his name implies, Tamale is a cool fellow.

Hot Tamale is a red chilli pepper with a black mustache and green hair.

His costume is a poncho with a sombrero.

He appeared numerous time in the series, though he didn't have a speaking role.

Bumpkin is one of the students at Bok Choy's class. He is a huge orange pumpkin with green hair and wears blue pants. Two flies can be seen flying around him. The only superpower he has is he can use his hair to trip and catch bad guys.

The Iron Can is a unmade superhero student at Bok Choy's class. His appearnce is based on a oil drum can, and has a star belt. According to Tom Brancroft, he is a vegatable, but doesn't know what kind though.

It's currently unknown what his super powers are.