Spaceship Drivin' Man is a song from The Doom Funnel Rescue!

Midgel: One, two, a one two three four!

Zidgel: Yep, this here's a story of a fella, a truck, and a load of party ice! Like most stories, this one starts at a mini-mart. It was the day of the big race, and the whole galaxy had turned out to see two giants of the road goin' head-to-head for the title of "Space Trucker of the Year". There was Scaly Slim, the meanest, sneakiest, road-hogginest trucker in the galaxy!

Zidgel (V.O.): Yep, he was a real scoundrel. Up against him was a legend of the space lanes. He had the keenest eye, the steadiest hand, the fastest foot (not to mention the best penmanship) of any trucker in the galaxy: Big Midge.

Scaly Slim: When I win this meet, you can smell my feet, you space-race losing man!

Zidgel (V.O.): Now, the aim of the race was for the boys to haul their cargo to the far end of the galaxy. First one to cross the finish line would be crowned the new champeen!

Zidgel (V.O.): The light turned green, the race was on! Now they're here, and now they're gone, off the line and past a guy named Lou. Drivin' at the speed of light, now it's day and now it's night. Now it's nearly twenty after two! Big Midge pulled out in the lead, until he saw a friend in need!

Big Midge: To stop or not to stop, what should I do?

Zidgel (V.O.): But Scaly Slim was gainin' fast. Big Midge refused to come in last, and so he made the choice to drive on through!

Zidgel (V.O.): Looks like Midge could win the race!

Scaly Slim: I think I really hurt my face.

Zidgel (V.O.): Then came another chance to do some good.

Kevin (through radio): Do a good deed when you can, stop and help your fellow...vacuum-cleaner..type guys..uh...man.

Zidgel (V.O.): But Big Midge wasn't listenin' like he should!

(Midge then sees the Rockhopper crashed on an asteroid,

Kevin: Do a good deed when you can, stop and help your fellow penguins!

Scaly Slim: You're 0 for 3, that trophy's mine tonight!

Big Midge: Should I go or should I stay?

Zidgel (V.O.): He sprayed Big Midge with boysenberries, melon balls, and fresh bing cherries, tangerines at $2.15 a pound! He took a shortcut past the sun, and when his dirty deeds were done, Scaly Slim had won the race hands down! Yep, Big Midge had struck out big-time. To make matters worse, the delay had caused his cargo to turn into icy slush.

Zidgel (V.O.): Seems that little shortcut past the sun had melted all of Slim's party ice. His cargo was ruined, and so was the party!

Cowboy Alien: Aw, shucks! It's just not the same without party ice!

Kevin: And maybe those little weenies on toothpicks.

Zidgel (V.O.): But then Big Midge got an idea! Putting together the traffic cones, and the flavored syrup with his load of icy slush, he made...

Big Midge: Sno-cones for everyone!

Everyone: The party is saved! Yee-haw! Boysenberry!

Zidgel (V.O.): Well, they told 'em everything. So for cheatin', double-dealin' and illegal use of melon balls, the trophy was taken away from Slim.

Cowboy Alien: I award this here prize to Big Midge, the true-blue "Space Trucker of the Year". Yee-haw!

All: Well, he learned he could do a lot of good helpin' folks when he can. Now he glows with pride feelin' good inside, he's a spaceship-drivin' man! 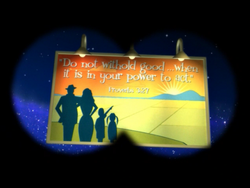 Retrieved from "https://bigidea.fandom.com/wiki/Spaceship_Drivin%27_Man?oldid=211064"
Community content is available under CC-BY-SA unless otherwise noted.