Tofu? Kung Fu? What is the Moo Shoo?

These super silly songs are sure to bring out smiles! Join Bob the Tomato, Larry the Cucumber and the rest of the VeggieTales crew in this all-new collection of favorite sing-along songs that the whole family is sure to enjoy! 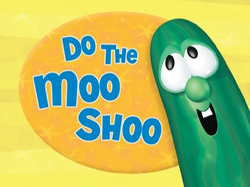 Retrieved from "https://bigidea.fandom.com/wiki/Sing-Alongs:_Do_the_Moo_Shoo?oldid=208776"
Community content is available under CC-BY-SA unless otherwise noted.