A (VHS) screener was a promotional VHS shipped to rental shops that used to plug an upcoming or new movie, television show, or similar to the public or press before its premiere or release.

Screeners would mostly be found in a fullscreen (1.33:1) format, although some are also in (letterboxed) widescreen. A screener mostly will have a "ticker" (message, copyright, and anti-copy telephone number) scrolling past the bottom of the screen sideways, while some feature markings that lead to the source of the video. Many of these types of videos will block these markings, while on others, the markings remain on the screen throughout the entire video. A screener can be filmed in two ways: subpar if done on a VHS recorder through poor capture equipment on a copied tape, or a superior print done from a master quality video.

From 1998 to 2001, Lyrick Studios sold screener tapes, most of which utilize the original masters of the episodes from their previous Everland Entertainment/Word Entertainment releases. 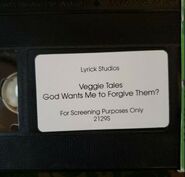