Scooter Carrot is a Scottish carrot who was a former ship engineer of the U.S.S. Applepies, and is also a police officer of Bumblyburg.

Despite shown to be strong and feisty, he can be a bit loony at times. He also doesn't appreciate when people don't understand what he's saying due to his strong accent.

It's shown in The League of Incredible Vegetables that he's terribly afraid of the dark. 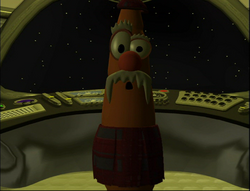 Retrieved from "https://bigidea.fandom.com/wiki/Scooter?oldid=208136"
Community content is available under CC-BY-SA unless otherwise noted.