Larry explains about the different types of homophones.

The Announcer: And now it's time for "Schoolhouse Polka with Larry", the part of the show where Larry comes out and sings a schoolhouse polka.

(Larry does a guitar like riff with the accordion)

The Announcer: This has been "Schoolhouse Polka with Larry". Tune in next time to hear Larry sing...

Larry the Cucumber: What happened to my preposition? I took it on an expedition. Put it by the thing I keep my fish in. Got infected with a skin condition.

Larry the Cucumber: …ahh, no. 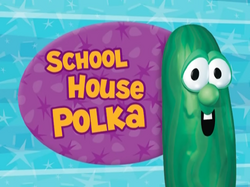 Retrieved from "https://bigidea.fandom.com/wiki/Schoolhouse_Polka?oldid=208392"
Community content is available under CC-BY-SA unless otherwise noted.