"Jesus gave everything! When we know how much Jesus loves us, it makes us wanna share His love with others, just like Saint Nicholas did!"
— Junior

Saint Nicholas: A Story of Joyful Giving is the thirty-sixth episode of VeggieTales and the third Christmas special of the series.

Everyone at town center is very happy Christmas is coming, especially Junior after getting two gold coins from his grandparents. Just then, Laura's dad shows up with his delivery truck breaking down, and he persuades Gus to repair it. However, because of his grouchy ways, Gus doesn't help out and closes his auto shop. Both Laura and her Dad are saddened about this, because that means he'll lose his job and they won't get a Christmas tree. Junior suggests that Santa can help out, but Bob doesn't really think that's going to work. He then decides to tell everyone at the center about the story of Nicholas, the origins of Santa.

The story starts at ancient Greece (which is now part of Turkey) and focuses on a small boy, who lives with happy and caring parents. However, he didn't understand why his parents like to help a lot towards others. Later that afternoon, Nicholas was fishing by the pier with his father when they spotted Gustav. The grouchy gourd fired one of his employees and the employee's daughters were worried about what happened. Nicholas' father gave the fired employee free fish, much to Gustav's appalled. Later that night, Nicholas' parents had a call from someone who was sick and needed help. Nicholas was worried that something might happen to them,which his predictions were right when he heard his parents died from the illness. Nicholas was left with wealth, but with no family with the exception of his servant Octavius.

Gustav came back and asks Nicholas on how he'll run the fishing business because his dad is gone. He decided to do the same thing by giving fish away, but one of Gustav's henchmen stole the basket of fish away from Nicholas and everyone was asking for some. With no other way, he runs away to a ship and sailed off to escape the calamity. Nicholas decided to head to Bethlehem, so he can find out about what his parents were talking about helping others. He eventually figured out when he spotted the church where Jesus was born, and a nun told about the goodness about helping others and realized that’s the reason his mom and dad gave too.

Nicky came back to his hometown afterwards, only to find it's been run by Gustav who is now mayor.He later told Octavius about what happened, and the servant knows about it as well. They decided that to help others is to sneak the fish inside their clothing. As they're doing so, the daughters of Gustav's former employee were caught by giving toys away. As punishment, Gustav sentenced them that they'll have to pay three gold coins, or else they'll be thrown in jail.

Nicholas decides to help the daughters out, but he needs to be very stealthy as the Roman guards might spot him. So both he and Octavius decided to be in disguise, and it worked for the most part until Larry makes it worse by making the story have snow. Because of the snow, Gustav and his army were able to track down both Nicky and Octavius. Things get worse as the pepper and gourd bumped into Bob and Larry, and they get stuck in a cart with sheep being dragged. Just as they're about to fall off the cliffs, the sheep decided to pull the cart with our heroes, and managed to safety cross. The old folk thanked Nicholas (who is still in disguise) for helping out his daughters, and the story ends with Nicky and Octavius hopping giving themselves nicknames.

Back in the town square, Junior was thinking how he can help his friend Laura. He then had an idea, and asked Jimmy, who then told Larry to see if they can help. The small asparagus went to Gus' shop, and gave him his gold coin to help pay the repairs for the truck to get fixed. He resisted as he needs more than just one coin, but soon the other town folks helped out thanks to Bob. Gus asked to Junior why he's doing such generous things, and his response is that we need to help others. Meanwhile, Larry and Jimmy decided to get a Christmas tree for the Carrot family, and had to do it in Santa's way. The Carrot family were surprised that they got the truck fixed, as well having a Christmas tree. The Veggies felt happy to help out. 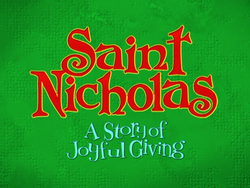