Gideon: Tuba Warrior is the 30th episode of VeggieTales The story is ased on the story of Gideon from the Book of Judges, while the short is based on George Mueller.

As the show opens on the counter-top, The Pirates Who Don't Do Anything burst in to host the show, overriding Bob and Larry. After reluctantly giving in, Bob walks off (leaving Larry, who is one of the Pirates), the Pirates read the letter, which asks, in essence, whether to trust God. The Captain, aka, Pa Grape, then tells the story of George Muller a man who "trusted God for everything."

The story is narrated by the Captain, as he tells it through the eyes of his ancestor Great-Grandfather Simon, a reporter for the Bristol Snoop, a tabloid-like newspaper. He goes to George Muller's orphanage and asks him non-sense questions ("Is it true you are running a school for alien dolphins?", "This is a turkey with the head of a cat") until he comes in with Muller to find that the orphanage is out of food and the orphans cannot eat breakfast the next day. They pray to God for food and the next day when Simon offers to go out and buy them food some friend of Muller's miraculously comes in and offers the children milk and bread.

Beginning with a montage of floats, as a victory parade for conquering the Midianites, Gideon stops the parade to explain that the large amount of praise lavished on him was not his to take. He then tells the "true" account, in which he reluctantly chooses to defend his country against an undefeated army of over 30,000 excessively hairy pickles, the Midianites, after an angel appears to him. Initially, he doesn't want to, and says that he's not a warrior, that he's afraid of the dark and screams like a girl, to which the angel replies, "He (the Almighty) chose you", "to say the truth I'm afraid of the dark too," and "Put me in the dark and I scream like a girl too." Gideon then asks for the miracle of a wet fleece and dry ground, which when the sign is complete, asks for another sign that the fleece be dry and the ground around drenched. This sign is completed too and Gideon accepts his job. When Gideon's sizable army is reduced to six carrots and six peas, he learns to trust God and is able to defeat the Midianites with horns and flashlights.

Finishing on the countertop, the Pirates are confused about Gideon's story as they did not know who he was (beyond their knowledge of Gideons International). However, Bob comes on and acknowledges he put the story in when the Pirates seemed to be at a lack for inspiration. After congratulating the Pirates for a good job on the show, Qwerty gives a verse and the Captain declares his desire to make a Pirates Who Don't Do Anything movie. Nobody is interested at first, and the show ends with the Captain saying he hopes he can get the funds necessary. 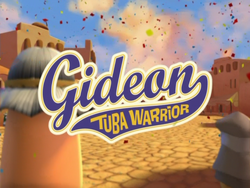 Retrieved from "https://bigidea.fandom.com/wiki/Gideon:_Tuba_Warrior?oldid=5635"
Community content is available under CC-BY-SA unless otherwise noted.