"You can do it, Zidgel. If you're not sure what to do next, just ask for help. It's okay. Don't let your pride get in the way of solving this problem. Remember, pride goes before a destruction, a haughty spirit before a fall."
— Michelle

Runaway Pride at Lightstation Kilowatt is the fourth direct-to-video episode of 3-2-1 Penguins!

Michelle walks into the kitchen to get a snack. As Grandmum prepares a snack for her, she begins to tell her about a young man she met at a church she attended when she was younger. Michelle is about to eat her snack when she tells Grandmum to tell her about him. Grandmum informs her that this man thought he was an expert at hanging large banners, but he was just a show off. He once refused to let anyone help hold the ladder that he was on while hanging a bake sale banner. He said that he knew what he was doing. She tells Michelle what the Bible says about pride, "Pride goes before a destruction, a haughty spirit before a fall." That means he let his pride get the better of him, and that ladder didn't turn out as steady as he thought. When Grandmum finishes telling Michelle about him, she accidentally squirts some jelly on Michelle's face. She then comments how pride and jellied eel are messy businesses.

In the attic, Jason finds some paint-by-numbers pictures in a box. Michelle sees this as something up her artistic alley. When she looks at what picture she gets, she guesses that it's a dog holding an umbrella. Jason tells her that the pictures are from the surrealist collection. He notices that Michelle isn't wearing her glasses and asks where they are. Michelle answers that she doesn't need them and thinks they're unnecessary because she has awesome talent and panache.

Michelle attempts to see what the small numbers are, but without her glasses, the picture appears blurry. Jason tells her how to paint the paint-by-numbers pictures. Michelle looks at him angrily in response. He asks if the numbers are small. Michelle answers that the numbers aren't small at all and she can expand her artistic talent beyond her finger paintings. Jason offers to get Michelle's glasses. As he tries to find where she left them, Michelle boasts that since she knows what she's doing, she doesn't need any help. The picture might not be as hands on as finger painting, but an expert artist can adapt if needed. Jason comments that he can't wait to see Michelle's finished picture on Grandmum's fridge.

After Michelle uses a lot of paint to paint her picture, she compares it to the picture on the box. In doing so, she notices that her picture looks different from the other picture. She decides to check on Jason's progress on his picture and notices that it doesn't look like the picture on the box. Jason thinks now is a good time to see Michelle's picture, but Michelle points out that there's a big blue thing where it's supposed to be a big brown thing. Jason retorts that it's a clipper ship, but he's having fun painting it his own way. Michelle boasts about her motor skills and panache can help her create true art. Jason starts to get tired of his sister's boasting and goes downstairs where he can finish his painting. Michelle doesn't object to this since she claims she doesn't need his help or his company.

As soon as Jason leaves, Michelle uses the Penguins' spaceship to hold her picture up. She focuses hard on the picture when the ship starts to fly, knocking her picture down. Fidgel then galeezels Michelle aboard the ship. Zidgel comments on how quick Fidgel was. Midgel flies the ship off into outer space.

While the ship is flying in space, Kevin notices that Michelle doesn't have her glasses on. He goes to where the emergency items are kept and takes some doughnuts and glasses and puts what he thinks are the glasses on Michelle. When he finishes, he realizes that he put the doughnuts on her. He immediately switches out the doughnuts for the glasses. When Michelle asks what their next mission is, Zidgel explains to her that they must prevent the destruction of thousands of space cruisers across the galaxy. Also, they have to re-instate the signal that warns against the dangerous Vvbrmvm-meese Waves and the cosmic reef. Michelle is confused at first, but Zidgel tells her they have to repair the beacon at Lightstation Kilowatt. Michelle says she doesn't know anything about what they need to do since she's an artist. Midgel helps to clear things up by saying that the lighthouse functions like a traffic light, letting ships know when it is safe to pass based on the color and action of its beacon. They have been working on a device that will function as a substitute beacon while the original beacon is being repaired.

As Midgel and Fidgel discuss how they will complete the mission, Zidgel points a laser beam at his hair and it catches fire. He runs around like crazy until Kevin gets a fire extinguisher to put it out. Zidgel thanks him for doing so. Michelle asks what her role in the mission is. Since Dr. Fidgel is colorblind, Zidgel will take his place at the remote control panel. Midgel will keep the the ship under control in the waves. And because color comes to Michelle naturally, she will check the beacon's color and visibility. And Kevin will be Zidgel's assistant.

The ship is approaching Lightstation Kilowatt when Zidgel asks whose turn is it to activate the landing gear. When Kevin holds up a card indicating that it's his turn, the crew immediately buckles up for landing. Kevin ejects the landing gear, which is a large anchor. The rest of the crew then braces themselves for a bumpy landing as the anchor catches some of the space rocks. The ship and the anchor spin themselves around the lighthouse.

At the lighthouse, the light bulb aliens angrily make beeping and clicking sounds at Zidgel. Kevin is able to understand them, and tells Zidgel that they said he's late. Zidgel is about to explain to them why they're late when one of the light bulbs exclaims that there's another ship coming. Fidgel then contacts Zidgel and informs him that a heavily loaded ship with highly fragile cargo is on its way. The ship, called the F.S.S. Emperor's Pride, will get caught in the tide and destroy itself in six minutes if something isn't done soon. Zidgel doesn't see the big deal about this, so Fidgel tells him that they're in the freighter's path. After having done so, Zidgel reassures Fidgel that he and Kevin are on the job. Midgel requests permission to suggest that he, Fidgel, and Michelle go and try to head off the Emperor's Pride before it gets any closer. Zidgel gives him permission to do so. Midgel suggests the very thing he requested permission to suggest. Zidgel lets him know that he and Kevin will carry on their mission, with a little panache.

Later on, Zidgel contacts the ship and Midgel tells him the cargo ship is starting to close in, and he's not sure if he could head them off on time. He asks if the gear is set up yet since that beacon is needed to warn them. Zidgel responds that he's about the activate the gear. Kevin walks over to do so, but has some difficulty. Zidgel goes over there and activates it with no trouble whatsoever. Zidgel turns on the beacon and it shines a dim yellow. However, unknown to either of them, the Emperor's Pride is on its way.

Meanwhile, aboard the ship, Fidgel warns Zidgel that he has less than a minute to get the beacon working. Suddenly, they lose contact with the lighthouse and the Emperor's Pride due to them being in a nebula. The nebula is so thick that Midgel has to shut down the ship until it clears up. Midgel then contacts Zidgel and urges him to get the beacon working so that visual contact between them can be established. Zidgel starts fiddling around with the gear and changes the beacon's brightness. He spins the rainbow spinner to make the beacon shine all kinds of colors, creating a light show of sorts. Fidgel, Midgel, and Michelle see the light show in the middle of the nebula. Michelle comments how pretty it looks, but asks if that is how it's supposed to look. Fidgel asks in concern if the captain's okay. Zidgel replies that he's doing fine. Fidgel is about to tell him that he can't treat the equipment that way when Zidgel shrugs off what Fidgel said and insists that it's going great and he knows what he's doing. However, in the middle of his light show, he accidentally breaks some of the buttons that control the color of the beacon. This turns the beacon a steady green. Michelle notices the green beacon and Fidgel becomes worried.

Midgel realizes that something is wrong when he sees the green beacon. The Emperor's Pride then bumps into the ship because it saw the green beacon and assumed it was in a safe passage. Fidgel urges Zidgel to change the beacon to a flashing red. He offers to help him, but Zidgel declines his offer due to him thinking he can solve the problem himself. After Zidgel hangs up the call, Midgel decides that now is the time to catch up with that ship. Back at the lighthouse, Zidgel tries to tell all of the ships that they shouldn't move forward even though the beacon is green. Michelle, Midgel, and Fidgel desperately tell Zidgel to fix the beacon so that it flashes red. The light bulbs suggest an idea that will help. Zidgel has had enough and decides to let Kevin dial up that ship. Michelle gives a message to Zidgel, encouraging to ask for help when he doesn't know what to do next. In her message, she tells him not to let his pride get in the way of solving the problem and repeats the Bible verse Grandmum told her earlier. After hearing her message, Zidgel admits to Kevin that he needs his help. Kevin, with the help of a fellow light bulb, gets an idea involving all of the light bulbs. Zidgel, Kevin, and the light bulbs immediately walk up into the lighthouse to put their plan into action. From the ship, Midgel, Fidgel, and Michelle see that the light bulbs are flashing red to help save the Emperor's Pride. However, it has already arrived at the lighthouse safely.

After the job is done, Zidgel recaps how Michelle's message helped save two vessels from the Vvbrmvm-meese Waves and how the light bulbs let him know that light show isn't what is needed to get the job done. So he gets Kevin to say a part of a knock-knock joke, but Kevin doesn't understand the whole concept.

As soon as Michelle is back at Grandmum's cottage, Jason walks up back to the attic with Michelle's glasses. After she puts her glasses on, she apologizes to Jason for her prideful attitude. She shows Jason her picture painted the wrong colors as a result of letting pride get the better of her, and she doesn't have enough paint to fix it. Jason offers Michelle the paint he used so that she can redo it.

Over at the Comet Lounge, Ventrilomatic and Rusty perform their stand-up act, and the Penguins perform their third song, Space Surfin' Superstar.

You know what they say; "Green and steady, passage ready. Red and blinky, conditions stinky." 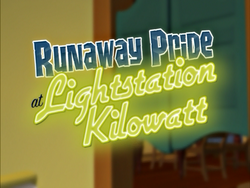 Retrieved from "https://bigidea.fandom.com/wiki/Runaway_Pride_at_Lightstation_Kilowatt?oldid=214554"
Community content is available under CC-BY-SA unless otherwise noted.