The Daily Bumble is the newspaper for Bumblyburg. It is run by Bob, who is the editor and head chief.

Its staff members include Junior Asparagus, Vicki Cucumber, and Larry.

The newspaper business was founded in 1904. The mascot is a bumblebee.

There are five levels of floors in the building (six if you count the rooftop).

Bob's office is on the top floor. It contains a desk and part of the wall is made of glass. This is where Vicki and Junior usually tell Bob the news.

An elevator leads to a clear cement rooftop on The Daily Bumble. Awful Alvin and Lampy once overlooked the city up there. It is probably the highest building in Bumblyburg.

The closet holds Larry's supplies for cleaning. Larry often goes there when he is secretly talking to Archie in his mop.

It appeared in all of the episodes of the Larry-Boy cartoon series. 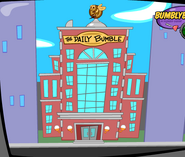 Add a photo to this gallery
Retrieved from "https://bigidea.fandom.com/wiki/The_Daily_Bumble?oldid=187079"
Community content is available under CC-BY-SA unless otherwise noted.