"I'm a talking weed, you're a talking carrot. Your point was?"
— The Rumor Weed responding to Laura's remarks

The Rumor Weed was not always like this. Prior to her creation, she was just a sentient plant on the rooftops of Bumblyburg. Larry-Boy accidentally pushed the plant off the roof of a building (but was also unaware of it) while talking to Alfred after dealing with the Milk Money Bandit. Afterwards, the plant got electrocuted by telephone lines and fell into the sewers, and thus the Rumor Weed was created.

After school, Junior and Laura had a conversation about Alfred being a robot. They wanted to keep it to themselves, but the Weed heard them and wanted to hear more information. They tried to tell her that they're not supposed to talk to strangers and share things with them (when asked if their parents have taught them to share), but she interrupts them as she doesn't care, so they decided to share their story anyway, and she claimed that she'll keep it to herself, or so they thought.

Soon, she started spreading the rumor around Bumblyburg, grew bigger, and started to become "The Mother Weed" thanks to Junior and Laura's story. Larry-Boy tried to stop her when Alfred discovered her hideout, but ultimately failed.

The Mother Weed rises from the sewers, takes Alfred, and takes over the police station. After Laura explains to Dad Asparagus that they started the rumor, he explained to them about that what Alfred said earlier was actually a figure of speech, Junior and Laura spread nice words around the citizens of Bumblyburg. This ultimately kills the Mother Weed, and turns her into a beautiful flower.

Larry-Boy afterwards keeps the Weed's glasses as a souvenir and kept it in his lair.

The Rumor Weed takes on a very diva-like persona. She tends to be dramatic, stylish, and above all else, gossipy, liking to collect stories and spread them to other people.

The Rumor Weed is obviously a green weed, with yellow hair, red lips, a white pearl necklace, and pink shades (purple in LarryBoy and the Bad Apple). 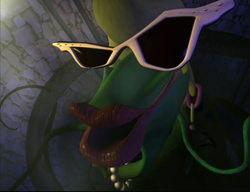