Robert Ellis is a American animator and was one of the original animators at Big Idea, the second employee to be hired by Phil Vischer. He worked for VeggieTales from the beginning until after production of The Star of Christmas.

Add a photo to this gallery 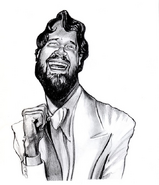 Self portrait
Add a photo to this gallery

Retrieved from "https://bigidea.fandom.com/wiki/Robert_Ellis?oldid=209930"
Community content is available under CC-BY-SA unless otherwise noted.