Abe and the Amazing Promise is the 34th episode of VeggieTales.

The first story is a retelling of Abraham 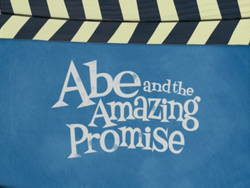 Retrieved from "https://bigidea.fandom.com/wiki/Abe_and_the_Amazing_Promise?oldid=6861"
Community content is available under CC-BY-SA unless otherwise noted.