Rack, Shack, and Benny is the fourth episode of VeggieTales. It's a retelling of biblical story of Shadrach, Meshach, and Abednego, with elements from Terry Gilliam's films.

The story is told by Grandpa George and takes place at the Nezzer Chocolate Factory where the employees work hard all day making chocolate bunnies on an assembly line. In celebration of selling their two-millionth chocolate bunny, Mr. Nezzer announces that for 30 minutes all employees may eat all the bunnies they want. While all other workers ravenously devour the chocolate, Shack (Junior Asparagus) convinces his friends Rack (Bob the Tomato) and Benny (Larry the Cucumber) to abstain. Junior emphasizes his stance by singing a lullaby called "Think Of Me" that his mom taught him.

When Mr. Nezzer leaves his office only to find all the workers sick except for Rack, Shack, and Benny, the three are rewarded and promoted to Junior Executives. The following day, Mr. Nezzer calls the trio into his office and tells them that he has constructed a 90-foot (27 m) high bunny which he intends to force all employees to bow down to. Through singing of the "Bunny Song," Mr. Nezzer reveals that he believes nothing in the world (such as God, church, school, healthy food, and family) is more important than the bunny. Those who refuse to prostrate before the statue will be thrown into the factory's furnace.

Disagreeing with Mr. Nezzer, while all the other employees obey, Rack, Shack, and Benny refuse to sing the song and bow down. Mr. Nezzer confronts the trio and demands that they sing the song, but the trio again refuses and sing a reprise of "Think of Me." Mr. Nezzer is touched but still tells the guards to take them away. Meanwhile, Laura Carrot plans their rescue. After being pushed down the furnace chute, Laura Carrot rushes in and rescues them with her delivery truck and tries to flee, with two guards pursuing her. Eventually, they are recaptured and Rack, Shack, and Benny fall into the furnace. While Mr. Nezzer gloats, Mr. Lunt looks inside and notices a fourth person in the furnace who is really shiny and none of them are being incinerated. Shocked, Mr. Nezzer tells them to come out and the trio emerges from the furnace unscathed. Mr. Nezzer realizes that it is God who saved the friends and he apologizes for his actions with the trio forgiving him.

The episode was based off the story of Shadrach, Meshach, and Abendigo from the book of Daniel, and was made in Big Idea's new headquarters, a bankrupt screw machine factory. Development was very difficult and ambitious for the company at the time. Ten people worked on the episode with only 4 computers and towards the end, everyone suffered exhaustion.

Phil stated on the audio commentary that the factory was built entirely by Chris Olsen and took weeks to build due to being the biggest set created at the time. As such, this episode has several animation errors (following the second episode), many of which take place in the factory alone. 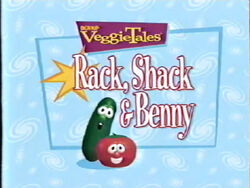 Retrieved from "https://bigidea.fandom.com/wiki/Rack,_Shack,_and_Benny_(episode)?oldid=193799"
Community content is available under CC-BY-SA unless otherwise noted.