Qwerty is the kitchen countertop's desktop recipe computer in VeggieTales.

Qwerty's been always showing Bible verses for Bob and Larry when the show is about to end.

He broke down in Sumo of the Opera due to the antics of Lutfi. He got repaired afterwards.

Unlike most computers, Qwerty is not perfect. In Where's God When I'm S-Scared?, he accidentally pulled up a recipe for yummy meatloaf instead of the verse.

He is usually quiet, though he does like teasing Bob sometimes, like when he did a Norm's Note version of the verse for Huckleberry Larry, and when he changed his screen to the paper bag Larry wore in Noah's Umbrella.

According to Phil Vischer, Qwerty was originally based on an IBM 386. After his complete upgrade, he is based on an Apple iMac.

His current upgrade includes e-mail, a screensaver, a voice chip, and a webcam. 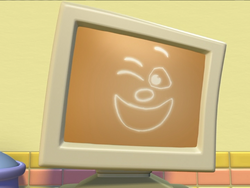 Retrieved from "https://bigidea.fandom.com/wiki/Qwerty?oldid=208784"
Community content is available under CC-BY-SA unless otherwise noted.