Queasy Rider was a interactive story on the official website. It is done in the style of a comic book.

It's almost Junior's bedtime, but he hasn't cleaned up his room. His dad told many times to pick up his toys, but Junior ignores as he was tired hearing all about rules. Later that night, Junior woke up to get a glass of water. But then he fell on his skateboard and zoomed out of his room, through the stairs, and out of his house!

He then bumps into Bob and Larry, who were just on a night walk. They kept zooming through the street until they get close by a curve, where there's a forest of cacti and broken glass towards the bottom of the ravine, and they plummet towards the cliff!

Fortunately, it was all a dream, as Junior woke with a startled. He decided to clean his room up. As his father walked down the hallway to see what's all the ruckus. He is proud that his son cleaned his room, though he doesn't know why he's wearing a bike helmet. Junior just answered "Just in case...". 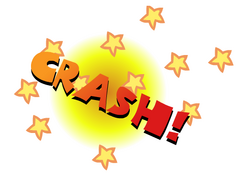 Retrieved from "https://bigidea.fandom.com/wiki/Queasy_Rider?oldid=193096"
Community content is available under CC-BY-SA unless otherwise noted.