Pistachio - The Little Boy That Woodn't is the thirty-seventh episode of VeggieTales. It is based on the Carlo Collodi novel, The Adventures of Pinocchio and Disney's 1940 movie Pinocchio.

A curtain that says "Extreme Redo: Crying Edition" is seen on the countertop. Larry is telling Bob to follow him. When Larry is seen on the countertop, Bob is wondering what Larry is up to. Larry says, "You'll see." Larry takes off the blindfold and shows Bob the curtain. Bob thinks its just a curtain. Larry tells Bob that it's an "Extreme Redo: Crying Edition" curtain. He tells him that while he was on his vacation that the crew from Extreme Redo had come in and redid the kitchen. The host and the two crew members come out. The host asks Bob how is he feeling. Bob says the he feels good and when the host tells the two crew members they aww at it and sob. Then, the host tells Bob to get ready to feel great. The host, Larry and the two crew members say, "Pull... that... curtain!" The curtain is pulled, revealing light blue painted walls with two throw pillows and two cookie jars. Larry is impressed with the new countertop, while Bob thinks it just looks the same. The host tells Bob to let it all out (cry). Then Bob wonders where Qwerty is and heads to see him in his new look.

Larry says hi to Qwerty. Qwerty responds by saying, "Greetings, Larry." Bob is surprised by this. Larry told Bob that he had an Extreme Redo and that he needed an upgrade for 10 years. Larry tells Qwerty that he is looking good. Qwerty says, "I feel like a million bits. Ha ha. Get it? Bits?" After he says that, the host and the crew laugh at his pun. The host says that he upgraded his humor chip. Then Qwerty says that he has gotten mail. The host says that he has never had mail before and now he does and asks him how it feels to have mail. He says that he feels like a million bits. The two crew members thinks it's sweet, but Bob doesn't. Then the mail changes to a video chat. A kid appears on screen and says this: "Dear Bob and Larry, My mom & dad are always telling me stuff I don't wanna do. Like making my bed, doing my homework, practicing piano. That kind of stuff. All I want to do is play. What should I do? Your friend, Liam Young." After that, Bob thinks it was cool. Larry says that they're hip, happening, and now thanks to Extreme Redo. Bob then claims that he doesn't know what to say. The host says that he doesn't have to say anything. One of the crew members tells him that he can cry if he wants. So Bob starts to cry. The host hands him a pack of tissues while the crew members comfort him. Larry says to roll the tape.

Pistachio - The Little Boy That Woodn't 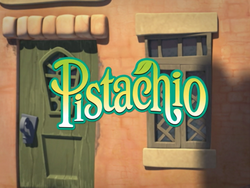 Retrieved from "https://bigidea.fandom.com/wiki/Pistachio_-_The_Little_Boy_That_Woodn%27t?oldid=216881"
Community content is available under CC-BY-SA unless otherwise noted.