Petunia Rhubarb is one of the main characters from VeggieTales. She is Larry’s girlfriend. She is very ditzy, energetic, kind and believes that beauty and goodness is within oneself, not by their physical appearance.

She returned in the new revival series, The VeggieTales Show.

In her first appearance, she was the princess of Rhubarb. Prior to the Great Pie War, she was the wife of Ryan, who is son of Gildersleeve the Invincible, ruler of Scone.

After the war and their husbands death, her mother-in-law Nona was the enemy of Rhubarb. But because she was compassion towards her, Petunia left her kingdom and moved with Nona outside of Scone where Duke's apple orchard is.

After meeting with Duke, Nona told Petunia to ask him if he can battle against Otis, who refused to help Nona and Petunia after the war. He also challenged him should have both halves of the duck.

After Duke won the battle, he and Petunia decided to get married so he can always take care of her forever.

Since then, Petunia and Larry have been the official couple of the series and are usually paired up together in stories or songs.

Petunia is a tall, green rhubarb with red hair held in a braid with a pink headband, pink earrings, baby pink eyeshadow, red-painted lips, a brown dress with a white collar, and a dark brown belt with a square gold buckle.

Sometimes, her headband, braid, and/or earrings would be either pink or yellow depending on the episode she appears in. In some episodes, she doesn't wear a headband at all.

In the character redesign, she has loose red hair (replacing her braid), red-painted lips, a fucshia collared blouse with a mustard yellow flower on the chest, an orange band on her waist, and a fucshia maxi skirt.

In The VeggieTales Show, her headband, braid, and earrings are all pink. 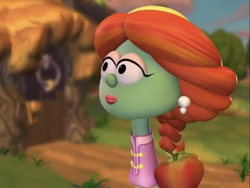 Retrieved from "https://bigidea.fandom.com/wiki/Petunia_Rhubarb?oldid=210920"
Community content is available under CC-BY-SA unless otherwise noted.