Pa Grape is a wise old grape who is one of the main characters of VeggieTales.

Pa is originally from the hills of West Virginia. Despite his origins, he speaks with a Yiddish accent and has some stereotypical Jewish mannerisms such as saying "oy" and "oy vey". He is married to Ma Grape and has two children named Tom and Rosie.

Pa first appeared with his family in the VeggieTales episode God Wants Me to Forgive Them!?!, where he portrayed a country bumpkin-type, filling in for the role of the "Pa Jode" character in the Grapes of Wrath parody. This appearance established a very senile personality that would persist in his appearances throughout the early VeggieTales episodes.

However, after taking on the role of Melvin in King George and the Ducky, Pa began to become a much more intelligent and wiser character. Since then, he has gone on to be a main player in the VeggieTales series, playing a wide range of characters that reflect his paternal but peculiar personality. Some of his most well-know roles include Abraham in Abe and the Amazing Promise, Seymour Schwenk in The Star of Christmas, Mordecai in Esther... The Girl Who Became Queen, as well as being the leader and captain of The Pirates Who Don't Do Anything.

Outside of acting, Pa has shown an interest in inventing and tinkering.

Pa Grape is very wise and down-to-earth, often being a source of good advice to his friends and peers. He enjoys helping his friends and encouraging them to do what is right. In contrast, Pa isn’t afraid to have fun and be silly, which can make him look rather odd in the eyes of his peers. But at the end of the day, Pa is someone the VeggieTales crew can always rely on and trust through and through.

Pa is a pale green grape. He has a lavender nose with a bushy, light gray mustache and eyebrows. Despite not having any visible eyes, Pa often wears a pair of glasses with silver frames (though he occasionally wears a pair with gold frames as well). He also dons a black top hat with a red (or gray) hat band around the crown.

For VeggieTales in the House, Pa was redesigned along with the rest of the VeggieTales cast. He was given a pair of beady black eyes (much like the French Peas), a bigger nose, and more rounded and stylized facial hair, with a mustache that permanently covered his mouth. Pa also gained a new larger and rounder pair of glasses without any temples as well as a smaller top hat.

Despite Pa's body, nose, and glasses not changing color in the Netflix series, his is incorrectly colored (dark green, red, and gold, respectively) in his promotional art used for the series and VeggieTales' social media accounts.

Since his return in The VeggieTales Show, Pa has returned to his original design. However, he no longer wears his black top hat. 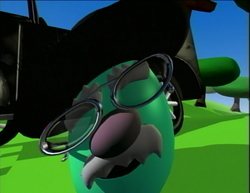