Omelet is the first segment of Lyle the Kindly Viking.

In the kingdom of Denmark, two servants (played by Jean Claude and Phillipe, respectively) approach the baker Horatio (played by Scooter) and explain to him that Prince Omelet requests his daily eggs cooked light and fluffy. Horatio tells them that he has the last eggs in the entire kingdom and is worried that the prince won't share his eggs with his starving people, but proceeds to cook the eggs anyway. Meanwhile, Omelet (played by Jimmy Gourd) laments about the trouble of his country running out of eggs and that his people are starving. Horatio then approaches Omelet, bringing him his eggs cooked light and fluffy, before telling him that they're the last eggs in the kingdom. Omelet then says, "Alas, poor yolks, I'll chew them, well, Horatio." After Horatio leaves, Omelet then makes note that Ophelia has come, but off-stage, Mr. Lunt, dressed in drag, does not want to do it because it's embarrassing. Archibald tells him that in Shakespeare's day, all the women's roles were played by men, before pushing Mr. Lunt on stage.

Ophelia (played by Mr. Lunt) explains to Omelet that the people of Denmark are starving and that there aren't enough eggs to go around while he feasts on eggs everyday. When Ophelia suggests to Omelet that he share his eggs with the people, Omelet is outraged, saying that if he does, then he won't have any, before Ophelia tells him that God likes it when we share our blessings before leaving. After Ophelia leaves, Omelet then performs a spoof of the famous "To Be Or Not To Be" speech, asking whether or not he should share his eggs. A young lad (played by Percy Pea) then shows up while playing a game of Battleship, and asks Omelet to play with him, which Omelet agrees to. The young lad then notices Omelet's plate of eggs and asks if he would try a bite. At first, Omelet is hesitant, but he finally permits the young lad to try his eggs. Once the young lad takes a bite, Omelet realizes that he just shared and that it feels pretty good, before the young lad tells him that the things we do for others usually make us feel good as well.

Because of this generous act that he just committed, Omelet gathers everyone in the town square and announces to everyone that he has decided to share his eggs with everyone. Horatio then tells Omelet that there aren't enough eggs to go around before Polonius (played by Jerry Gourd) asks Omelet where they could find these eggs. Omelet answers, "You know, they're the little white round things that come out of chickens," which shocks Polonius, saying that he thought that they were ping-pong balls, before cutting to a ping-pong table that is messy with eggs. Omelet then proclaims for everyone to have eggs cooked light and fluffy. This gives Horatio an idea, deciding to name these light and fluffy eggs after Omelet, calling it the "Omelet". Ophelia then asks Omelet where to get some toast, and Omelet answers, "Get thee to a bakery!" After the play ends, Larry the Cucumber and Junior Asparagus are in the audience. Larry then asks Junior if he understood any of that. Junior replies that he didn't understand a word! 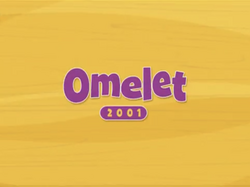 Retrieved from "https://bigidea.fandom.com/wiki/Omelet?oldid=204760"
Community content is available under CC-BY-SA unless otherwise noted.