Nicky is a pepper who lives in Greece.

Nicky lived in Greece with his mother and father. He had everything until his parents died from an illness. He soon had to run the fish business that his father ran, but then then ran away due to Gustav threatening him about giving away fish for free, causing everybody to chase Nicky because of it.

Nicky then went to Bethlehem to find out the one thing that makes him happy. He met Sister Claire at the church and she told him that happiness comes from helping others.

He returned to his home country, which was now run by Gustav. He and his servant, Octavius, decided to help others secretly so they won't get caught. After seeing one of Gustav's former worker's daughters getting in trouble for giving away free toys, Nicky decides to help them out. He tried many ways to get past their house without the Roman guards noticing him. When they eventually found him, Nicky ran away from Gustav until he bumped into Bob and Larry and ran over a cart with a flock of sheep. The old father then thanked Nicky for being generous to his daughters.

Prior to his parents' death, he's always happy. He loved his parents, especially his dad, and they both love fishing by the pier. However, he's worried that if he gives too much, he won't get anything back. This changed soon after his visit to the Holy Land

According to Brian Roberts, he is around the same age as Larry.

Nicky is an orange and yellow pepper. He has a long brown stem with green leaves on it. 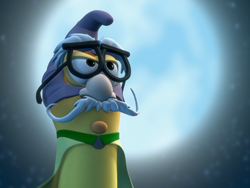 Retrieved from "https://bigidea.fandom.com/wiki/Nicky?oldid=207719"
Community content is available under CC-BY-SA unless otherwise noted.